This is the way the climate scare ends; not with a bang, but a whimper 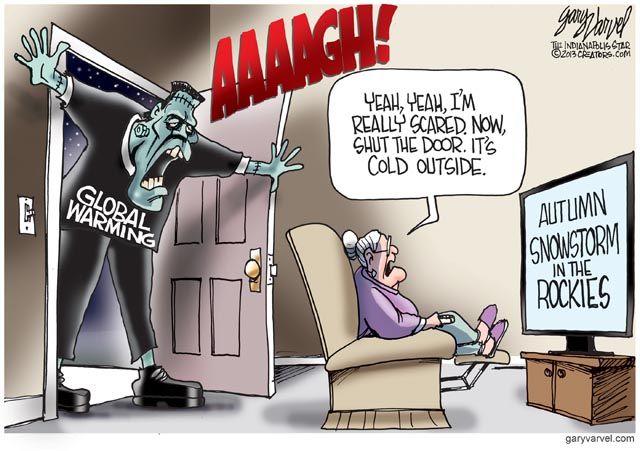 What does the future hold for the climate change debate? Will there ever come a day when we see the headlines across the globe, ‘It’s Official – There Is No Climate Change Crisis’? Hardly – for unless we find some way to leap ahead in the currently highly immature science of climate change and manage finally to pin down the exact direct and indirect (via feedbacks) warming effect of adding greenhouse gases to our atmosphere and the exact effects of natural changes in our climate the outcomes will remain uncertain. The eminent scientist Stephen Koonin has stated that, ‘Today’s best estimate of the sensitivity [of the atmosphere to the addition of carbon dioxide]… is no different, and no more certain, than it was 30 years ago. And this is despite an heroic research effort costing billions of dollars.’ Basically, unless the ‘Uncertainty Monster’ is slain (and there is absolutely no reason to believe that will happen in the foreseeable future) neither the believers nor the skeptics can ‘prove’ their case. In which case we seem to be in a ‘wait and see’ position. But for how long? Even if the current global warming Slowdown persisted for decades it would still be possible that dramatic and dangerous warming was just about to resume. Indeed in 2015 The UK’s Royal Society expressed the view that it would take 50 years of divergence between the observations and the climate models before they would be convinced that the theory of anthropogenic climate change was flawed. We cannot be absolutely sure that there will be no climate change crisis – only that it is becoming increasingly unlikely. So the politically-correct scientific shibboleths of the ‘climate change crisis’ idea may well persist for a great many decades.

Having persuaded the world to spend trillions of dollars on fighting man-made climate change is the Intergovernmental Panel on Climate Change (IPCC) really going to admit that the causes of climate change are actually far more complex than they originally thought and so they may have been fundamentally mistaken about both the attribution and quantification of warming? And what about the UK’s Royal Society and the American National Academy of Sciences, those most renowned of scientific institutions; are they going to admit that they may have put political correctness and scientific funding concerns before scientific objectivity? What about all those climate scientists who have been so careful to tacitly collude with the IPCC and not rock the climate change crisis boat; are they going to admit that their judgments may have been skewed by considerations of the self-interest of retaining their jobs, careers, incomes and pensions? And the many climate research units around the world; are they going to say, ‘Well we must go where the science takes us – if the science says that there actually isn’t a problem then we’ll just have to shut up shop.’ What about all of the senior politicians in the western world who have foisted an avalanche of regulations, taxes and controls on their electorates to ‘fight climate change’; are they going stand up and admit that their scientific illiteracy led them to be completely fooled? Are all those prestigious environmental organizations, such as the WWF, Greenpeace and Friends of the Earth going to admit they had only ‘signed up’ to the global warming scare because it happened to suit their agendas, attracted donations and increased their influence? Is the BBC, that globally respected bastion of impartiality and objectivity, going to admit to the people of Britain that it abused its position of trust by simply taking on face value the selective and spun science fed to them and taking an irresponsible and unjustifiably partisan editorial approach to the climate change debate? What about all those newspaper journalists who for years have been repeating NASA and IPCC Press Releases as ‘objective facts’, neither subjecting them to critical analysis nor asking any awkward questions? What about all those celebrities who have lined up to pledge their support for fighting climate change by flying less frequently in their private jets to reduce their ‘carbon footprint’? What about all those school teachers who (willingly or unwillingly)…