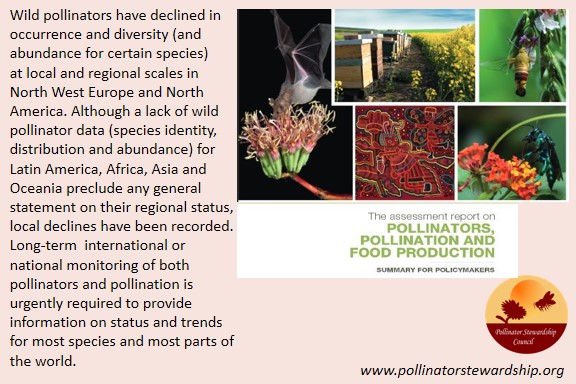 WASHINGTON, D.C. —Friends of the Earth and its allies announced a major advancement in their fight to protect essential pollinator populations. Walmart (NYSE: WMT) and True Value have decided to eliminate neonicotinoid pesticides, a leading driver of global bee declines, from company garden retail supply chains. This follows an ongoing campaign by Friends of the Earth and allies urging garden retailers, including True Value and Walmart, to stop selling plants treated with neonicotinoids and remove products containing them from store shelves.

In an email to Friends of the Earth, Walmart confirmed that its growers have eliminated neonics from approximately 80 percent of its garden plants. Walmart has also eliminated neonicotinoids in almost all its off-the-shelf gardening products. True Value announced (http://webiva-downton.s3.amazonaws.com/877/57/7/10216/TrueValueStatement_Letters.pdf ) that it will phase out products that contain neonicotinoid pesticides by the spring of 2018 and that the company is working with its growing partners to remove neonicotinoids from its plants.
“This is a great day for bees and sends an important message that the market is listening to consumers and sound science in refusing to sell bee-killing pesticides,” said Tiffany Finck-Haynes, Food Futures Campaigner at Friends of the Earth U.S. “Friends of the Earth and our allies will continue to challenge Ace Hardware to eliminate these pesticides as quickly as possible to protect pollinators, people and the planet.” READ MORE

This is the second in a series of articles on Bee Audacious, the “collaborative working conference using dialogue to envision bold evidence-based ideas through which honey bees, other bees beekeepers and pollination managers could prosper” held in Marshal, CA December 11-13, 2016.
As Tom Seeley states in his paper on The 5 Habits of Highly Effective Hives, “colonies are remarkably complex, in many ways comparable to an animal brain, despite being individually quite simple. And every year, faced with the life-or-death problem of choosing a new home, honey bees stake everything on a process that includes collective fact-finding, vigorous debate, and consensus building. It is a democratic process that humans — especially office drones — might do well to emulate.” READ MORE

Like other fruit plants, blueberries need pollinators, such as bees, to grow. Farmers are growing increasingly dependent on western honeybees, scientists say. But bumblebees are more active in poor weather and pollinate highbush blueberries more, so UF/IFAS researchers wanted to test bumblebees on a local blueberry farm. Bumblebees can boost blueberry yield by 70 percent, good news for Florida growers in the heart of their blueberry season, a University of Florida Institute of Food and Agricultural Sciences study shows. The news also accentuates the need for blueberry pollinators, said Joshua Campbell, a post-doctoral researcher in the UF/IFAS entomology and nematology department. READ MORE