Who’s at Work in Your Compost Pile? 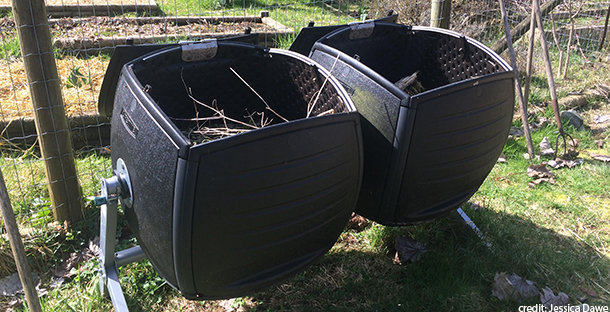 Open your compost bin and you’re likely you’ll see a variety of critters scatter as the light exposes their busy activity. Sow bugs scurrying under the debris, worms pulling their heads back into the soil, or a fruit fly aiming for your nose. Gross might be the word that comes to mind, but before you swat, crush, or blaspheme the residents, take another look. Sure, you expect to see worms transforming your kitchen scraps into healthy, rich soil, but they’re not the only ones doing the job. In fact, there are a plethora of organisms working together to achieve the same goal.

The intensity of your composting practice is what will determine who you’re likely see when you look inside your compost bin. A static compost (one that you add to but don’t turn) will have more organisms than an active compost. That’s because an active compost (one that you turn routinely) generates a lot of heat during the initial stages of breaking down. Heat isn’t conducive to larger decomposers, so their numbers generally don’t become more abundant until the pile begins to cool.

For the sake of covering all organisms, we’ll be discussing who you would find in a static compost. From smallest to biggest, you’ll be surprised at who does the most work, and who’s presence indicates when your pile needs help.

The primary workhorses of the compost are the microorganisms that you can’t see with the naked eye. The first to arrive are the mesophilic bacteria, who begin to break down the soluble and readily degradable materials. The process of their work causes the temperature in your compost to rise rapidly. Once core temperatures reach above 105 degrees F (or 40 degrees C), populations of mesophilic bacteria recede and the thermophilic bacteria take over.

These thermophiles are made up primarily of the genus Bacillus and will work until the compost reaches above 140 degrees F (60 degrees C). At this time the population of Bacillus declines and the thermus bacteria take over. These are the same bacteria that are found in the hot springs of Yellowstone National Park and the thermal vents deep in the sea. This period can last from just a few days to a few months, depending on the size and content of the pile.

As the pile begins to cool and enters the maturation phase, the Actinomycetes really get to work. These are the microorganisms that break down the tough, complex materials of lignin, chitin, cellulose and proteins. They are also responsible for the sweet smell of soil you enjoy when harvesting the finished product.

The word ‘fungi’ might bring to mind the plump button mushrooms you find at the market, so it’s no wonder you might not recognize fungus in your compost. A mushroom is only the fruiting body of fungi, tasty for sure, but this organism is much more admirable for the work they do as mycellium in the compost or soil.

Mycellium are made up of strands and observed as an explosion of fine, white filaments reaching into the debris to create a dense mat. Though delicate to the touch, mycellium have the strength that few others do. They can break down lignans, one of the toughest natural materials growing on earth. Ever so slowly, mycellium reach out, pushing their tips into the dry stalks of a sunflower or branch where they will…