2017 Global temperatures are leveling off – near 1980 temperature anomaly 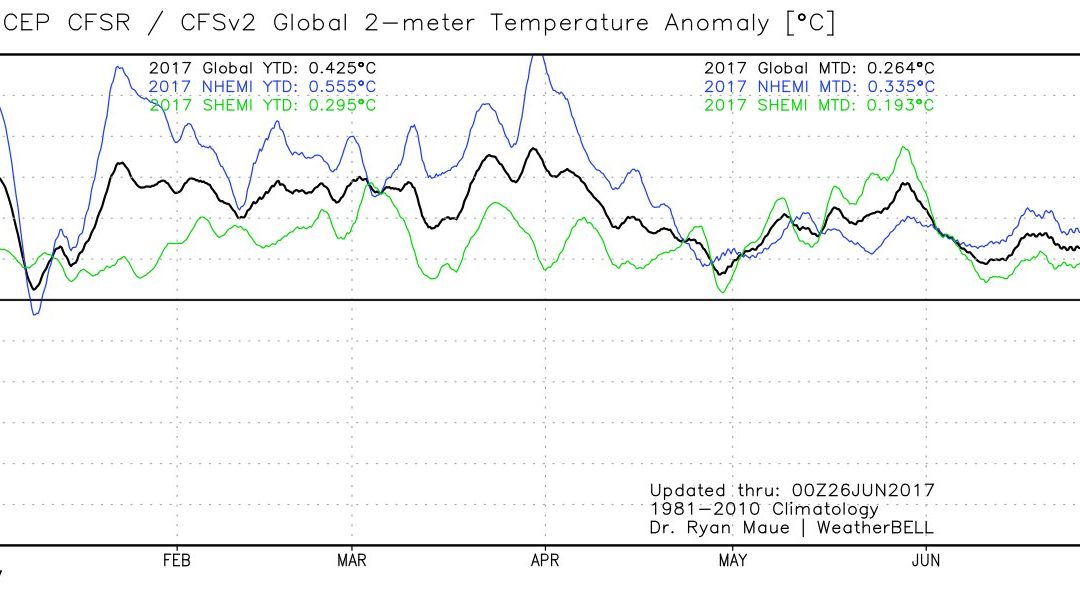 From the “dashed hopes for the warmest year evar!” department comes this update from Dr. Ryan Maue on the global surface temperature:

Tropical vs. non-tropical temperature anomalies have balanced out mostly for the past few months. No El Niño suggests continued T levels:

In a nutshell what Dr. Maue is saying is that without a strong El Nino event to boost temperature, global temperatures are stabilizing around +0.26°C. FYI, NCEP data used in these plots is from the NOAA National Centers for Environmental Prediction. The data is available here: http://cfs.ncep.noaa.gov/cfsr/downloads/

Recently, we covered a story from the Australian Bureau of Meteorology (BoM) that called off their El Niño watch. BoM says:

All eight international models surveyed by the Bureau of Meteorology now suggest tropical Pacific Ocean temperatures are likely to remain ENSO-neutral for the second half of 2017.

It’s a tough business to be in when your CO2 driven “climate change” can’t get there unless a natural ENSO event pushes up the temperature for you. Meanwhile, Justin Gillis at the New York Times claims “Earth Scorching CO2” is higher than ever while temperatures stabilize at a value that is the same as about 1980 (0.27°C), according NASA’s GISTEMP:

Looks like that big El Niño driven peak in GISTEMP of 0.98°C for 2016 could be coming down in 2017 if the current values hold and ENSO neutral conditions remain.

Just look at the sea surface temperatures, there’s not a lot of warm water:

NOTE: I expected some complaints about comparing GISS and NCEP graphs, and there were plenty. I did it to illustrate a point.

Which one is the RIGHT temperature anomaly? Anomalies are all products of their baselines, and baselines are a choice of the publisher.

If NASA GISS is to be believed as the world’s most cited source for global temperature, then 0.27C is correct for 1980.

Unfortunately, they have been living in the past, and refuse to update their baseline. UAH did it, RSS did it, NOAA/NCEP did it….why not GISS? The answer: Gavin Schmidt.

Not sure about BEST: They don’t list their baseline period in their graph: http://berkeleyearth.org/wp-content/uploads/2015/03/land-and-ocean-summary-large.png

This is why absolute temperatures don’t suffer from the…