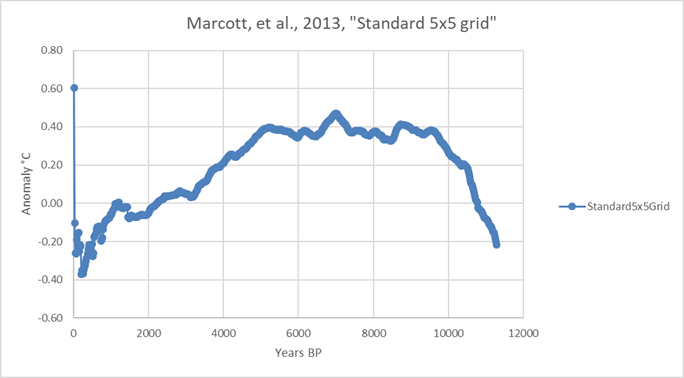 Author: Andy May / Source: Watts Up With That?

The only recent attempt at a global Holocene temperature reconstruction available today is the one by Marcott, et al. (2013), the paper abstract can be viewed here. His reconstruction is shown in figure 1.

The reconstruction in figure 1 goes from the present (1950) on the left to nearly the beginning of the Holocene about 11,700 years ago on the right. The Holocene is normally defined as “â€¦the first signs of climatic warming at the end of the Younger Dryas/Greenland Stadial 1 cold phaseâ€¦” (Walker et al. 2009). It is often considered a geological epoch or series. It is part of the Quaternary geological period and is equivalent to the older geological term “Recent.”

The reconstruction shows an abrupt warming in the last 100 years (see the left side of figure 1). This single point at 1940 AD is due to proxy drop out, proxy inconsistencies and the authors changing some published dates in the proxies according to Steve McIntyre at climateaudit.com here, here and here. Also see “The Tick” by Grant Foster here for more discussion, the first comment to “The Tick” is by our own Nick Stokes. Even Marcott has acknowledged that his reconstruction from 1890 AD onward is not robust. The following quote is by Marcott, here.

“We showed that no temperature variability is preserved in our reconstruction at cycles shorter than 300 years, 50% is preserved at 1000-year time scales, and nearly all is preserved at 2000-year periods and longer. Our Monte-Carlo analysis accounts for these sources of uncertainty to yield a robust (albeit smoothed) global record. Any small “upticks” or “downticks” in temperature that last less than several hundred years in our compilation of paleoclimate data are probably not robust, as stated in the paper.”

The problem is that 300 years is a very long time. As we will see, many very significant climatic events begin and end in less than 300 years. Marcott et al. (2013) chose too many proxies with poor temporal resolution, which reduced the resolution of their reconstruction to the point that significant details were lost.

This is a new look at Marcott’s proxies. It is a good collection and most of them are marine sea surface temperature proxies. This is a good thing because most of the heat energy or heat capacity on the Earth’s surface is in the oceans. In fact, over 99.9% of the surface heat content is in the oceans and only 0.071% is in the atmosphere, for the details of this calculation see the spreadsheet here. Warming of the atmosphere is not particularly significant on a climatic scale.

It is very logical to investigate long term climate changes using ocean temperature proxies from foraminifera shells and fossils (“forams”), planktonic and algal material. Traditionally the magnesium and calcite (Mg/Ca) percentages or Î´18O ratios in planktonic foraminifera have been used to deduce ancient sea surface temperatures. On land, ice core Î´18O records and pollen are used to estimate ancient air temperatures. More recently we have seen more use of haptophyte algal alkenones, especially the U37K’ (also written as UK’37) index to get ancient sea surface temperatures, see the link here. TEX86 records from marine plankton have also been used recently to obtain sea surface temperatures and are among Marcott’s proxies, see here for a discussion. The original reference for the TEX86 sea surface temperature proxy is Schouten, et al. (2002) here. A complete list of the proxies used by Marcott, plus one I added from Rosenthal, et al. (2013) and references and links to the original papers can be downloaded here. I did not use all Marcott’s proxies in my reconstructions, those that I did use are noted in the spreadsheet.

The proxies were examined considering the criticism of Marcott’s analysis by Javier, McIntyre and Foster. The 500-meter depth Indonesian ocean proxy presented in Rosenthal, et al. 2013 was added to the list. Proxies used in this reconstruction were selected using the following criteria:

The major climatic events of the Holocene are the Holocene Climatic Optimum (HCO) and the Little Ice Age (LIA), these events represent the maximum global average temperature and the minimum temperature respectively in this period. As noted above, there is abundant evidence that the global temperature difference between these two points exceeds one degree Celsius. Therefore, it seems logical to make sure the proxies cover both events. Further, since all the reconstructions are temperature anomalies, we have built the anomalies as differences from the proxy mean between 9000 BP and 500 BP.

There is concern that the reason the Marcott, et al. (2013) reconstruction is underestimating the LIA to HCO temperature difference is that they included too many proxies with very long sample intervals. Proxies with long sample intervals miss essential detail and smooth and dampen detail in any reconstruction. Just averaging too many proxies can dampened detail if there is error in the proxy dates.

Climate changes over the Holocene occur, in large part, by latitude. This is due to the Earth’s orbital obliquity (amount of axial tilt which changes over a 41,000-year cycle) and precession (wobbling of the axis over 19,000 to 23,000 years) cycles, as well as the long-term transport of heat by ocean currents. This is explained well by Javier here. In the same post, Javier explains the orbital effects in this way:

“Changes due to obliquity have the effect of redistributing insolation between different latitudes following an obliquity cycle of 41,000 years. When obliquity was maximal 9,500 years ago, both poles received more insolation due to obliquity, while the tropics received less. Obliquity also affects seasonality, at maximal axial tilt, there is an increased difference between summer and winter at high latitudes. But unlike precession changes, obliquity alters the amount of annual insolation at different latitudes in a 41,000-year cycle. This is represented by the background…