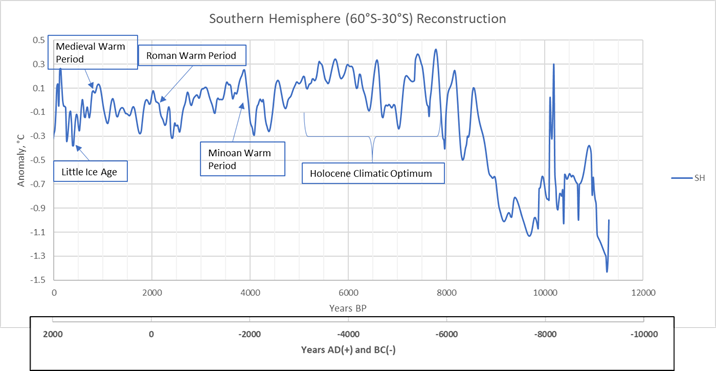 Author: Andy May / Source: Watts Up With That?

In the last post (see here) we introduced a new Holocene temperature reconstruction for Antarctica using some of the Marcott, et al. (2013) proxies. In this post, we will present two more reconstructions, one for the Southern Hemisphere mid-latitudes (60°S to 30°S) and another for the tropics (30°S to 30°N). The next post will present the Northern Hemisphere mid-latitudes (30°N to 60°N) and the Arctic (60°N to the North Pole). As we did for the Antarctic, we will examine each proxy and reject any that have an average time step greater than 130 years or if it does not cover at least part of the Little Ice Age (LIA) and the Holocene Climatic Optimum (HCO). We are looking for coverage from 9000 BP to 500 BP or very close to these values. Only simple statistical techniques that are easy to explain will be used.

Our reconstruction for this region is shown in figure 1. The R code and the input and output datasets for the Southern Hemisphere mid-latitudes can be downloaded here.

There are only four proxies in this reconstruction, three in New Zealand and one off the coast of Chile. The locations are shown in figure 2.

Two of the proxies have been combined into one record, the three proxies used are plotted in figure 3.

Three proxies were rejected due to large sample intervals, TN057-17 (Nielsen, et al., 2004) was rejected because it was very anomalous. See the plot in figure 4.

TN057-17 is a sea surface temperature proxy located in the Southern Ocean, right on the Antarctic Polar Front (APF), see Figure 5. The APF has a very abrupt sea surface temperature change. It is the southern limit of synchrony with the Northern Hemisphere climate system. This location, currently, has sea ice cover about two weeks per year (Nielsen, et al., 2004) but the time of ice cover has changed a lot during the Holocene and this has probably had a dramatic effect on the proxy. The maximum sea ice cover was 4300 BP, which is also the time of the lowest TN057-17 temperature.

There is a risk that the TN057-17 proxy has been affected by local conditions that are only vaguely connected to climate change and for this reason the proxy was rejected.

The logic in combining these two proxies is it gives us one more proxy in a region that has few available and, at least part of this composite is outside the New Zealand area. The most recent portion of MD97-2121 (4000 BP to 3300 BP) was not used in the composite as it looked suspicious. Pahnke and Sacks (2006) report that the MD97-2121 core top (the most recent sediments in the core) may be problematic due to lack of recent sediments at the cored location. In any case, a 3000-year-old core top, presumably close to the sea floor, has probably been churned quite a bit and should…