A Lesson of Hope 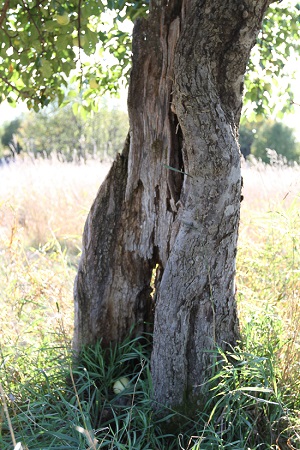 Sometimes life’s disappointments teach the greatest lessons of hope, and that’s exactly what happened at our homestead on a particular day in June 2007. It involves what’s probably the oldest living thing on our property, a legendary apple tree we call the “Old Man Tree.”

The fateful day was bright and clear until about 2 p.m., when sinister greenish-black clouds rolled in from the west. We don’t get tornadoes up as far north as Manitoulin Island, Canada, but this wind might as well have been one. Century-old barns came down, roads remained blocked for days because of broken trees, and entire homes were damaged as windows gave way under pressure of the wind, letting driven rain soak everything.

The storm struck in less than a minute, and after getting my kids down into our limestone root cellar, I raced around outside battening down everything that might blow away. Just as I was running for the root cellar myself I noticed a young maple tree bent over double in the wind. Just that very morning I’d removed the support stakes from this 10-year-old tree, figuring that it was now strong enough to stand on its own. I spent the rest of the storm standing next to that tree, holding it up against the wind. It was perhaps the longest 15 minutes of my life. I still remember a robin’s nest blown down next to my feet while I was holding the maple, the young ones never to survive the fall and the rain.

When things finally got quiet, I surveyed the damage and found that the Old Man Tree had suffered a seemingly fatal blow. The wind had split the trunk, and about 80 percent of it was now severed from the ground, with all but one measly branch still attached to the remaining wisp of a trunk. Our outhouse was ruined, shade trees were heavily damaged, my hay elevator had blown down and broken irreparably, and the door had blown off our chicken house. All this was bad enough, but losing the Old Man Tree was like losing family.

One of our old neighbours, a man named Ivan Bailey, was born in 1909 and had lived on the property his whole life, and even Ivan could remember picking apples from the…