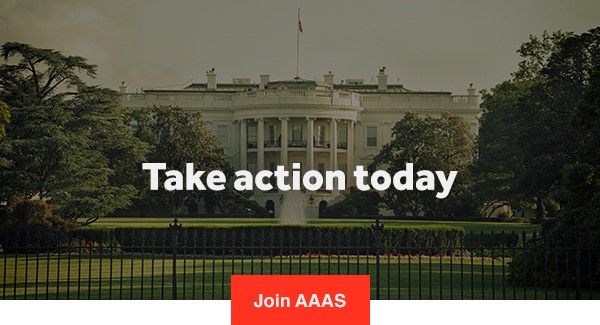 This morning, I received another email from the American Association for the Advancement of Science…

We cannot overstate this: Under the current administration, the future of scientific inquiry and discovery in the U.S. is in serious jeopardy.

You can do something important right now to protect our progress and our planet: become an AAAS member.

Organizations that have propelled us forward — NIH, NOAA, and the EPA, just to name a few — are facing major funding cuts. President Trump has begun the process of pulling the United States out of the Paris Climate Accord, putting us in the company of only two other nations to reject this planet-saving agreement.

As scientists, engineers, teachers, students, and science advocates, we must join forces and oppose this administration’s dire proposals for science. We must continue to educate and keep pressure on elected officials to make evidence- and research-based decisions that protect our planet and help all of humankind to progress.

Join today, and you’ll get a free “I Am a Force for Science” water bottle as a thank you.

Thanks in advance for your membership,

*Offer valid from May 31, 2017 to June 30, 2017, for new individual members only. There is a limit of one water bottle per membership order. Please allow up to four weeks for domestic delivery and up to five weeks for international delivery. The AAAS water bottle is provided as is without any guarantees or warranty and cannot be exchanged or returned. In association with the product, AAAS makes no warranties of any kind, either express or implied, including but not limited to warranties of merchantability or fitness for a particular purpose.

The climate models have never demonstrated any predictive skill.

The ensemble consists of 138 model runs using a range of representative concentration pathways (RCP), from a worst case scenario RCP 8.5, often referred to as “business as usual,” to varying grades of mitigation scenarios (RCP 2.6, 4.5 and 6.0).

Over time, a drilling program should track near P50. If your drilling results track close to P10 or P90, your model input is seriously flawed.

If the CMIP5 model ensemble had predictive skill, the observations should track around P50, half the runs should predict more warming and half less than is actually observed. During the predictive run of the model, HadCRUT4.5 has not *tracked* anywhere near P50…

I “eyeballed” the instrumental observations to estimate a probability distribution of predictive run of the model.

Note that during the 1998-99 El Niño, the observations spiked above P05 (less than 5% of the models predicted this). During the 2015-16 El Niño, HadCRUT only spiked to P55. El Niño events are not P50 conditions. Strong El Niño and La Niña events should spike toward the P05 and P95 boundaries.

The temperature observations are clearly tracking much closer to strong mitigation scenarios rather than RCP 8.5, the bogus “business as usual” scenario.

The red hachured trapezoid indicates that HadCRUT4.5 will continue to track between less than P100 and P50. This is indicative of a miserable failure of the models and a pretty good clue that the models need be adjusted downward.

In any other field of science CAGW would be a long-discarded falsified hypothesis.

[From: The Good, the Bad and the Null Hypothesis]

Remember how all the news stories keep telling us the evidence is growing and getting stronger than ever “against the skeptics”?

David Stockwell has done a beautiful graph of the value of climate sensitivity estimates that of recent climate research that Steven McIntyre discussed in detail.

The trend looks pretty clear. Reality is gradually going to force itself on the erroneous models.

“Let’s hold them accountable” for fraudulently clinging to high climate sensitivities, when all of the recent observation-based evidence indicates that it is quite low.

Since 2011, at lleast 14 studies published in the peer-reviewed scientific literature provide strong evidence that the equilibrium climate sensitivity (ECS)—how much the earth’s average surface temperature will rise under a doubling of the atmospheric carbon dioxide concentration—lies near the low end of the IPCC estimates (Figure 5). This recent research includes investigations of the earth’s thermal response to changes in climate forcings that have taken place over the past century, millennium, and over glacial periods.

Figure 5. Equilibrium climate sensitivity (ECS) estimates from new research beginning in 2011 (colored), compared with the assessed range given in the Intergovernmental Panel on Climate Change (IPCC) Fifth Assessment Report (AR5) and the collection of climate models used in the IPCC AR5. The “likely” (greater than a 66% likelihood of occurrence) range in the IPCC Assessment is indicated by the gray bar. The arrows indicate the 5 to 95 percent confidence bounds for each estimate along with the best estimate (median of each probability density function; or the mean of multiple estimates; colored vertical line). Ring et al. (2012) present four estimates of the climate sensitivity and the red box encompasses those estimates. The right-hand side of the IPCC AR5 range is actually the 90% upper bound (the IPCC does not actually state the value for the upper 95 percent confidence bound of their estimate). Spencer and Braswell (2013) produce a single ECS value best-matched to ocean heat content observations and internal radiative forcing. https://judithcurry.com/2015/12/17/climate-models-versus-climate-reality/

Several of these research findings were published subsequent to the 2013 release of the IPCC’s Fifth Assessment Report (AR5), and thus were not included in that Assessment. Others were considered in the IPCC AR5, and still others were ignored. And while the IPCC AR5 did reflect some influence on these new low ECS estimates—by expanding its “likely” range of ECS estimates downward to include 1.5°C (the low end was 2.0°C in the 2007 IPCC Fourth Assessment Report) and omitting a “best estimate” value (which had previously been given as 3.0°C in the 2007 report)—it still doggedly held on to its high end “likely” estimate of 4.5°C. This was a disservice to the latest science, but was a necessary step to preserve the IPCC’s reliance on climate projections made by models with an ECS averaging 3.2°C and ranging from 2.1°C to 4.7°C—the same models recently evaluated by Christy and in our AGU presentation. Had the IPCC fully embraced an ECS near 2.0°C—that which the recent literature suggests—it would have had to throw out much of the rest of the report.

Let’s hold them accountable for fraudulently describing RCP 8.5 as a “business as usual” scenario

(1) AN INTRODUCTION TO SCENARIOS ABOUT OUR FUTURE