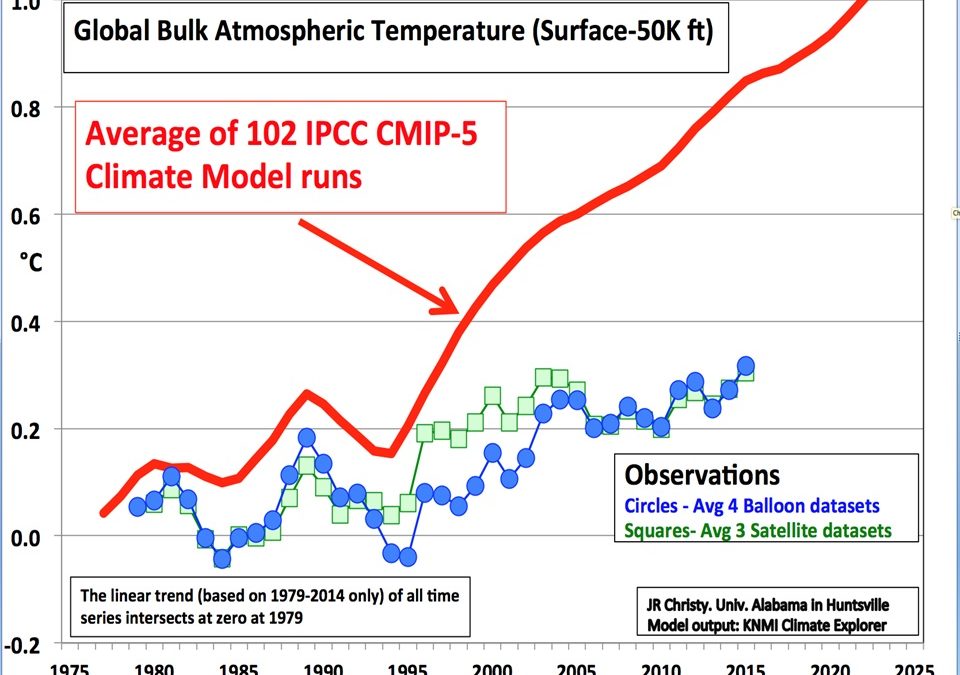 A new paper has been published in Geophysical Research Letters that shows once again, that climate models and reality significantly vary. It confirms what Dr. John Christy has been saying (see figure below). The paper also references Dr. Judith Curry and her work.

Global and regional warming trends over the course of the twentieth century have been nonuniform, with decadal and longer periods of faster or slower warming, or even cooling. Here we show that state-of-the-art global models used to predict climate fail to adequately reproduce such multidecadal climate variations. In particular, the models underestimate the magnitude of the observed variability and misrepresent its spatial pattern. Therefore, our ability to interpret the observed climate change using these models is limited.

Identification and dynamical attribution of multidecadal climate undulations to either variations in external forcings or to internal sources is one of the most important topics of modern climate science, especially in conjunction with the issue of human-induced global warming. Here we utilize ensembles of twentieth century climate simulations to isolate the forced signal and residual internal variability in a network of observed and modeled climate indices. The observed internal variability so estimated exhibits a pronounced multidecadal mode with a distinctive spatiotemporal signature, which is altogether absent in model simulations. This single mode explains a major fraction of model-data differences over the entire climate index network considered; it may reflect either biases in the models’ forced response or models’ lack
of requisite internal dynamics, or a combination of both.

Here we show that state-of-the-art global models used to predict climate fail to adequately reproduce such multidecadal climate variations. In particular, the models underestimate the magnitude of variability in the twentieth century.

Our study documents pronounced differences between the observed and CMIP5-simulated climate variability in the twentieth century. These differences are dominated by a coherent multidecadal hemispheric-scale signal present in the observed SST and SLP fields but completely missing in any of the CMIP5 simulations.

Despite our explicit decomposition of the climate variability into the forced and internally generated components, dynamical attribution of the multidecadal model-data differences still remains uncertain. On one hand, if our derived CMIP5-based forced signals are realistic, these differences must arise from internal climate system dynamics presumably misrepresented in CMIP5 models, such as sea ice dynamics [Wyatt and Curry, 2014], oceanic mesoscale eddies [Siqueira and Kirtman, 2016], positive cloud and dust feedbacks [Evan et al., 2013; Martin et al., 2014; Brown et al., 2016; Yuan et al., 2016], or SST-forced NAO response [Kushnir et al., 2002; Eade et al., 2014; Stockdale et al., 2015; Siegert et al., 2016]. On the other hand, however, it is possible that CMIP5 models underestimate multidecadal variations in the true response of the climate system to external forcing or misrepresent the forcing itself [Booth et al., 2012; Murphy et al., 2017]; if this is true, the model-data differences reflect the mismatch between the actual and CMIP5-simulated forced signals, whereas the real world’s internal climate variability may be consistent with that simulated by the models. In either case, we strongly believe that model development activities should strive to alleviate the present large discrepancies between the observed and simulated multidecadal climate variability, as these discrepancies hinder our fundamental understanding of the observed climate change.

The SI is here: https://people.uwm.edu/kravtsov/files/2016/05/Supporting-Information_AGU_K2017_revised-1bwhctd.pdf

One of the figures from the SI shows the differences between the models forcing response and observed natural variability seen in AMO, NAO, etc cycles: