birding by ear, with nathan pieplow: how to listen to what birds say 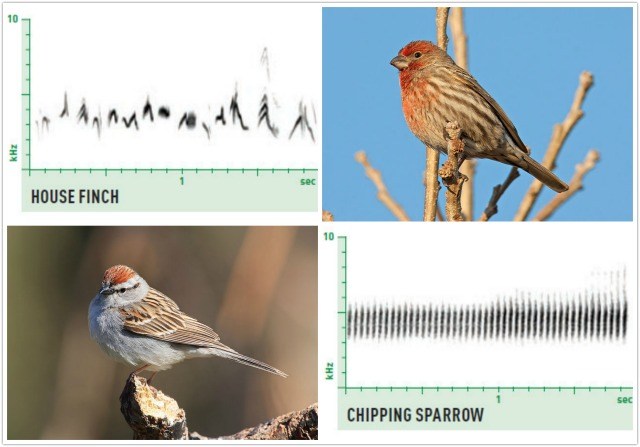 EVERY SPRING I promise to learn to recognize a few more voices—bird voices—to tune in more observantly to the members of the incredible chorus around me. When Nathan Pieplow’s new book, the “Peterson Field Guide to Bird Sounds of Eastern North America” arrived in March, I thought: Help has arrived!

Just as the birds are trying to tell one another something with the sounds they make, we, too, need a vocabulary for what we’re hearing. Otherwise, it can be overwhelming, to say the least. The book helps us learn the words to describe sounds, and more.

Nathan Pieplow is an expert ”earbirder” who has been intensively studying and recording birds since 2003. A South Dakota native, he lives in Boulder and teaches writing and rhetoric at the University of Colorado.

He joined me on the June 19, 2017 edition of my public-radio show and podcast to help us understand a little bit more about what birds are saying, and especially how to be a better listener and “crack the code of what birds are actually saying.” Listen along as you read, using the player below (or at this link)—and be sure to comment at the very bottom of the page for a chance to win the “Peterson Field Guide to Bird Sounds of Eastern North America.

what birds are saying, with nathan pieplow

Q. The more I spend time with the book, the more I start to “get it.” It’s not like a regular field guide, where you just look at pictures and say, “I’m looking for a red throat and a black crown and a wing bar,” you know what I mean? [Laughter.]

Q. It’s a different kind of book, but very interesting. You describe it in the introduction as “a dictionary for the language of the birds.”

A. That’s the idea. There really weren’t any field guides to bird sounds, before mine came out. I kind of had to invent a new kind of book in order to create a field guide to sounds.

The book illustrates the sounds—it creates a picture of each sound using what we call a spectrogram, which is a computer-generated graph of the sound. Reading a spectrogram is kind of like reading music. You read from left to right, and the high notes are at the top and the low notes at the bottom.

It’s just that the notes’ shapes are different, based on what the bird sounds like, what its tone quality is. So if you learn a few basic shapes, and learn a few other tricks and rules, you can learn how to picture a sound and you can also learn how to look at a spectrogram and understand what it’s going to sound like.

Q. And there is a companion sound website to the book, too, at PetersonBirdSounds dot com, so you can use both tools concurrently to deepen your understanding.

How long was the book in the making? This was not a simple thing that you have done. After having the book a couple of months, each time I use it I say, “Oh, I didn’t get that till right now.” It’s a lot of layers.

A. I set out to create this book in 2003, so it was 14 years in the making for the Eastern volume, and I am currently hard at work on the Western volume.

Q. And when we say “East,” people should understand: Don’t tune out if you’re not on the literal East Coast; it’s a big area.

A. It includes the Great Plains, the Midwest, the South and the East.

Q. The same ideas that birds have a language, and that these pictures or spectrograms help to depict them, is good for anyone, anywhere, who is trying to bird by ear, as I keep trying to do better.

Let’s get right back to that dictionary-and-language idea. What are the birds talking about? It’s not just, “I hear the cardinal,” but there is language going on. What are the birds talking about? I know the many catbirds who nest in my garden sound like a bunch of crazy drunks at a bar; it sounds like they’re talking nonsense, but I don’t think they are.

A. Each species of bird has its own language, so you need to learn each different sound from each species and figure out what it means. We can use the cliff swallow as an example.

Q. If people don’t know the cliff swallow, where does it reside; where do people see it? [Photo above from Wikimedia.]

A. It lives all across the country. In the South, it’s only there in migration. But otherwise it’s almost everywhere. They live in colonies under bridges and in culverts, and they build nests, and they fly out during the day and then they capture insects on the wing.

Q. Like the other swallows we see acrobatically doing, or aerobatically.

Q. I know you brought along some sound files. Do you want to tell us what we are going to hear the cliff swallow “say”?

A. Cliff swallows have a very simple language, but they have several different words—we can call them words. One is the word that they use for danger, and that is this “zeer” call that they give.

Q. That does sound like something’s wrong—and we just repeated that; the bird wouldn’t do it in that fast progression.

A. That sound file was looped, but that’s the same basic call that they would give over and over again if they were upset. You would hear it if you go under the bridge and get close to their nests and fly close to your head, and they will say, “zeer, zeer, zeer”—all of them will say the same thing. It basically means “danger.”

Q. What’s next in their vocabulary?

A. They have another call that I call “churt,” which is a contact call. They’re basically telling one another, “I’m here; I’m checking in.” It’s the call that the parents will give when they’re approaching the nest to say, “I’m coming in with food.” So it’s like letting somebody know that you are in the area.

Q. Shall we hear that?

Oh, very different. So that’s the “here I am” of the cliff swallow. What else does it say?

A. They’ve got another call that is really fascinating; we don’t know if any other swallows have this call or not. There is a call that they give only on cool, cloudy days…

A. …because on cool, cloudy days, it becomes difficult to be a cliff swallow, because all the flying insects stay down in the grass when it’s cool and rainy. So they have to search very hard for swarms of flying insects, which is their food.

If one of the cliff swallows from the colony gets lucky and finds a bunch of flying insects on a cool, cloudy day, they’ll give this special call that’s called the “squeal” call, and it means, “I’ve found food; come quick and get some before they all fly away.”

Oh my goodness, that is excited.

A. And that’s one where you would only hear it once, and not in a row like that, but that’s a very interesting kind of rattle-y squeak call that alerts all the other birds in the colony to come and take advantage of the meal while they can.

Q. So that’s part of the vocabulary of the cliff swallow. Who’s another good example of a bird that we might start to listen to more carefully? [Photo of male red-winged blackbird, above, from Wikimedia.]

A. One of my favorite birds to listen to and talk about is the red-winged blackbird, which is one of the most abundant birds in North America. It’s found almost everywhere; most people have them in their backyard of nearby.

[Sound of red-winged blackbird’s typical male song; at 9:34 in recording.]

So that’s the male—and again, that’s looped, so we were hearing more than he’d do.