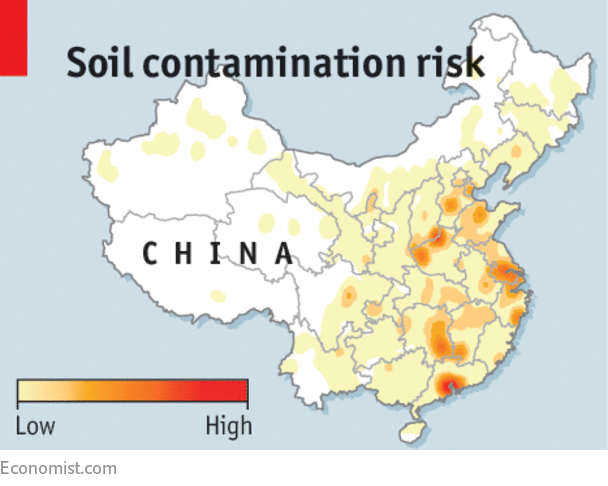 AFTER Donald Trump said on June 1st that America would pull out of the Paris accord on climate change, many people congratulated China for sticking with it. With America on the sidelines, some see China as the leader of the fight against global warming—an idea that the Chinese Communist Party is eager to promote (see Banyan). Although it is the world’s largest emitter of carbon dioxide, China has made a determined effort to cut back. It has burned less coal in each of the past three years. In 2016 it installed more wind-power capacity than any other country; three times as much as the runner-up, America. Some analysts believe that China’s CO{-2} emissions may peak in 2025, five years earlier than the goal it set in Paris. Yet it is premature to call China a champion of greenery.

Its air and water are notoriously foul. Less noticed, but just as alarming, much of its soil is poisoned, too. As our briefing explains the scale of the problem is hard to gauge, largely because China’s government is so opaque. A soil survey conducted between 2006 and 2011 was at first classified as secret. Many of its findings are still not public, but one grim statistic has emerged: one-fifth of Chinese farmland contains higher-than-permitted levels of pollutants, some of which threaten food safety. This is bad news for a country that has 18% of the world’s population but only 7% of its arable land. And it will be exceptionally costly and difficult to clean up. Soil just sits there, meaning that toxins linger for centuries.

Public alarm is growing. For evidence, ask any Chinese about “cadmium rice”, which contains a heavy metal that, if ingested, can…