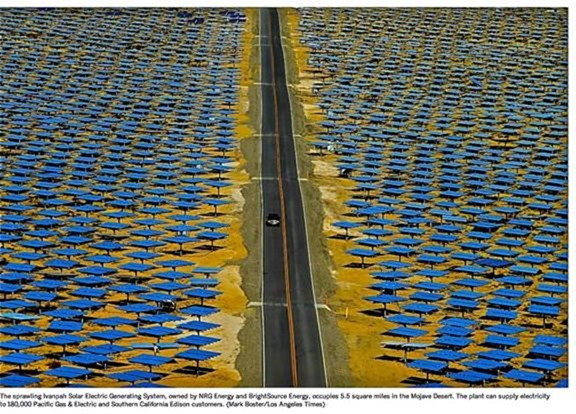 California’s renewable energy policy pushing huge mandated increases in wind and solar so the state’s globally irrelevant greenhouse gas emissions reduction targets can be met has it’s citizens providing and paying millions of dollars for unusable renewable energy to be sent to other states – and this problem will likely only grow in the future.

An article in the L A. Times headlines:

“Solar and wind power production was curtailed a relatively small amount — about 3% in the first quarter of 2017 — but that’s more than double the same period last year. And the surge in solar power could push the number even higher in the future.”

“The answer, in part, is that the state has achieved dramatic success in increasing renewable energy production in recent years. But it also reflects sharp conflicts among major energy players in the state over the best way to weave these new electricity sources into a system still dominated by fossil-fuel-generated power.”

The Times article notes that environmental and renewable energy advocates claim state regulators and utilities are approving and building more fossil plants which is contributing to these problems and demand that this be stopped.

However regulators and utilities note that:

“the transition from fossil fuel power to renewable energy is complicated and that overlap is unavoidable.

They note that electricity demand fluctuates — it is higher in summer in California, because of air conditioning, and lower in the winter — so some production capacity inevitably will be underused in the winter. Moreover, the solar power supply fluctuates as well. It peaks at midday, when the sunlight is strongest. Even then it isn’t totally reliable.

Because no one can be sure when clouds might block sunshine during the day, fossil fuel electricity is needed to fill the gaps. Utility officials note that solar production is often cut back first because starting and stopping natural gas plants is costlier and more difficult than shutting down solar panels.”

However elsewhere in the Times article the complex issues of California’s electric system grid reliability and stability are finally but only briefly acknowledged:

The Times article fails to adequately address many electric system grid reliability and stability issues that must be provided by dispatchable fossil, hydro and nuclear generation resources to maintain effective, dependable and continuous electric system operation.

Furthermore the Times article also fails to mention key limitations of renewable energy resources that are critical to electric system grid operation including regulating margin, spinning reserves, standby reserves, frequency stabilization and black start capabilities all of which are mandatory for successful and reliable operation of an electric system grid.

A recent study published in the Proceedings of the National Academy of Sciences (PNAS) addressed electric system grid requirements which renewable energy resources fail to provide and noted the following with regard to these limitations:

“Reliable operation of the grid involves myriad challenges beyond just matching total generation to total load. Its role in cascading failures and blackouts illustrates the important role of the transmission system (22). Reliable grid operation is further complicated by its ac nature, with real and reactive power flows and the need to closely maintain a constant frequency (23). Margins for generator failures must be provided through operational and planning reserves (24).”

California’s need to dump millions of dollars of excess renewable energy now and in the future is the result of the politically contrived climate alarmist schemes lead by Governor Brown and Senate Leader Kevin de Leon that reflect ignorance of how the state’s electric system grid reliability and stability must be maintained and the key fact that renewable energy resources are unable to provide these ignored requirements.