Climate Change This Week: Coral Collapse Presages Our Own, Fascinating Facts, and More! 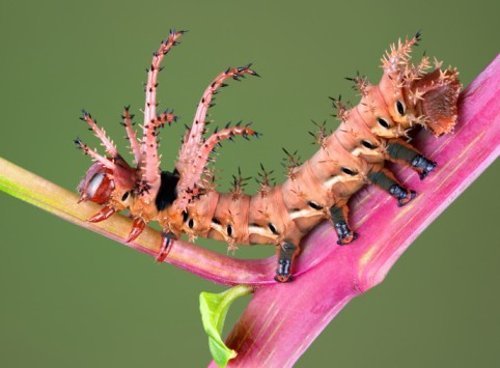 Today, the Earth got a little hotter, and a little more crowded.

And the chances of Donald Trump’s family and fortune surviving climate change are small, dwindling daily and irreversibly.

Saving BUB, Beautiful Unique Biodiversity, as in this Hickory Horned Devil that occurs in US Forests, is another reason to preserve carbon storing forests. Source www.buzzle.com

When we harm forests, we harm ourselves.

REQUIEM FOR A REEF

Coral reefs are bleaching and dying worldwide due to warming oceans:

Seascapes of Bleached Coral are spectres of mass starvation.

We know human activities are fueling global warming, but are failing to act.

Ultimately, this story is our failure of intelligence and morality. Like bacteria, we are:

A Slice of Incredible Coral Reef Life is revealed under ultraviolet lighting, exposing the truly wild colors of corals – just the tip of the beautiful berg of life we are losing as coral reefs are destroyed by climate change. Credit Jourday at reefbuilders.com

“You couldn’t be more dumb … to erode the very thing that life depends on — the ecosystem — and hope that you’ll get away with it,”— Biologist and Global Change Institute Director, University of Queensland Ove Hoegh-Guldberg.

“Whether you’re living in North America or Europe or Australia, you should be concerned” added Hoegh-Guldberg.

An Acid Future For Our Oceans is developing, as more CO2 is absorbed acidifying the seawater, as the past and projected rises in acidity above show. Source Tobias Friedrich, University of Hawaii

+ making it easier to invest fossil fuel free, and

Check It Out Today, and Spread the Word!

OO Fact: Humans Caused 100% Of The Past Century’s Global Warming show overwhelming evidence, and supported by 97% of all scientists. Yet, only 48% of US adults believe humans cause it, while only 40% believe it will harm wildlife, weather patterns, or shorelines.

OO Why Facts Don’t Change Our Minds sometimes. [MH: I change my mind with facts, and so do others.. Let’s grow this “revolution”!] New discoveries about the human mind show the limitations of reason. Takeaways:

Whether You Believe It Or Not, Gravity Is A Fact with consequences. So is climate change, which operates under the same set of physical laws. Source creativeenglishvocabulary.com

Thus, working through the policy implications of proposals TOGETHER is far more effective than pontificating.

CALLING A DENIER A DENIER

Calling deniers anything less (eg, “doubters”) is misleading and irresponsible.

OO Trump’s Climate Views: Combative, Conflicting And Confusing – In 2009, he co-signed a full-page NY Times advertisement calling for “meaningful and effective measures to combat climate change.” Now, he refers to climate change as a hoax or a joke.

In his seventh week in office, President Trump decides we should stop measuring things.

Forget about monitoring and regulating:

Under Trump, Droughts and Even Tornadoes Could Surprise Farmers who have relied on weather and seasonal forecasts by a NOAA agency, the National Weather Service. Source Shutterstock

“There are few important decisions farmers can make without contemplating weather.”

Compromising Coastal American Safety and greatly upping the pricetag of adaptation if it isn’t tackled now.

EPA Now Home to Climate Skeptic Clowns – and dark clowns indeed, if they refuse to acknowledge the reality of climate change, which threatens the safety and security of Americans and the USA. Photo Source Business Insider

The broken promises are:

1. To recognize climate reality – he said that EPA’s conclusion on how climate changing gases like CO2 endanger human health and welfare “needs to be enforced and respected” and is unquestionable. Now, he denies CO2 drives climate change.

2. To stand up for science – he said “science must serve as ‘the backbone’ of EPA actions.” Yet now, he directly contradicts the findings of scientists at every major American scientific organization, which are based on decades of intensive, peer-review research and data.

4. To be consistent on states’ rights – he claimed to favor greater authority for states. Now he’s considering revoking California’s right to have stronger clean air standards for cars.

5. To fight all forms of pollution – he claimed concern about dangerous pollution like mercury, smog and methane, butt now withdrew an EPA request for information about methane pollution from oil and gas drilling. So much for concern.

This is important — beyond our desire to have public officials with integrity, our kids’ health is at stake.

“Countries are going to pay for climate change one way or another.” — Brigadier General Stephen A. Cheney, USMC (ret). Photo Credit Charlie Riedel at Associated Press