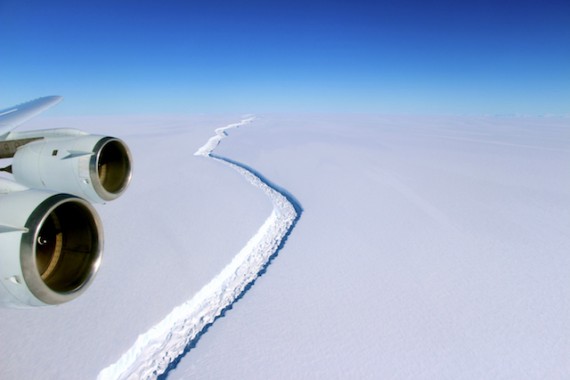 Scientists are watching intently as a titanic section of Larsen C, the fourth largest ice shelf in Antarctica, prepares to break off into the sea as an iceberg the size of Delaware. The question is, when?

ScienceAlert reports that satellite images began tracking the spread of an enormous crack in the ice shelf in 2010. As it reached 120 miles in length this spring, the fissure suddenly forked earlier this year. and the resultant rift will cause a 2,000 square mile section — 10% of Larsen C’s total area — to break off into the ocean.

Though scientists cannot predict exactly when this will happen, it could be a matter of weeks, says Dan McGrath, a scientist with the U.S. Geologic Survey.

When the sudden fork occurred, one crack continued parallel toward the…