Cutting the Climate Impact of Beef 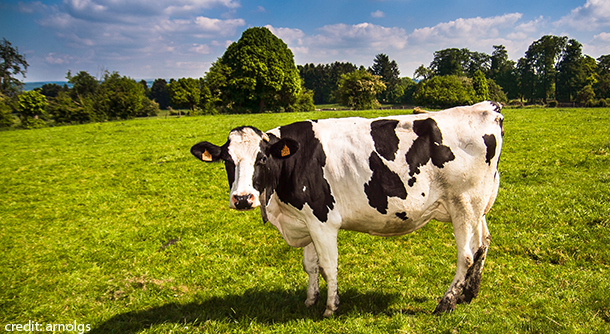 Global meat consumption has risen rapidly in recent decades, with profound effects on our climate. Carbon-storing forests have been cleared to make pasture for cattle, while growing grain to feed them has contributed additional climate-warming emissions. Then there’s what the cows themselves add to the climate problem: They produce a great deal of methane, a gas with roughly 30 times the global warming potential of carbon dioxide.

Efforts to get the world to eat less meat have gained some traction, with meatless meals becoming more common for many of us and whole websites dedicated to vegan and vegetarian recipes. However, getting people to eat less meat fast enough to fix our climate problem is highly unlikely. In fact, as the population grows and the incomes of people in developing countries rise, demand for meat has soared. Reducing the impact of the meat may prove more effective than encouraging curtailment, as it has in other areas like water and energy conservation. To lessen the impact of the world’s meat habit on the climate, scientists are working to find ways to reduce the emissions caused by cattle. And they’ve come up with some interesting discoveries.

A recent study from the Royal Botanic Gardens, Kew, Scotland’s Rural College, and the Senckenberg Biodiversity and Climate Research Centre, Frankfurt suggests that changing what animals eat could help cut the emissions associated with raising them. Ruminant animals, primarily cows and sheep, produce methane when grasses and other foraged plants break down in their stomachs.

The Kew study found that a warmer climate makes these plants tougher and less nutritious, which means they require more time in these animals’ digestive tracts, leading to increased methane production. Lead author Mark Lee notes that what their research uncovered is a “vicious cycle.” Cows and other grazing animals “produce methane which warms our planet. This warmer environment alters plants so they are tougher to digest, so each mouthful spends more time in the animals’ stomach, producing more methane, further warming the planet, and the cycle continues.” Less nutritious forage also leads to lower milk yields and less weight gain, requiring more animals to yield the same amount of milk and meat. More animals means more methane, perpetuating the cycle further.

Researchers mapped areas of the world where they expect the greatest increase in cattle methane production caused by changes in plant quality. They believe methane levels will rise everywhere, but they have identified particular regions of North America, Central and Eastern Europe, and Asia where they expect the most significant increases. They also noted that many of the identified areas are seeing sharp increases in livestock farming.