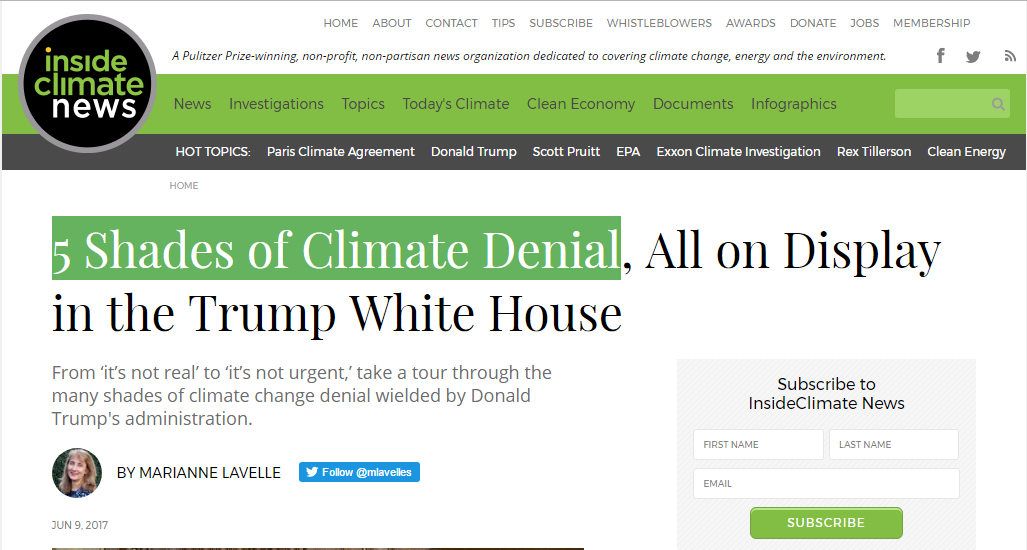 Whether dismissing global warming as a hoax, questioning humanity’s role in it, exaggerating the unknowns, playing down the urgency of action, or playing up the costs, President Donald Trump and his team have served up every flavor of climate denial.

Although the arguments varied—as if they were different shades or stages of denial—they all served the same purpose: to create an exaggerated sense of dispute in order to bolster a case against decisive climate action. The latest gambit is to avoid the subject entirely.

In his announcement last week that he would pull the U.S. out of the Paris climate agreement, Trump didn’t bother addressing… [blah, blah, blah]…

In Trump’s retelling, the negotiators of the Paris deal were not grappling with a planetary crisis… [they weren’t]…

To help understand the arguments, we have developed a guide to what the science says about the five types of climate denial we’ve heard from Trump, his team, and their supporters, and how each served as a stepping stone on the path of a retreat from Paris.

To the hard-core unbelievers, climate scientists are conspirators in it for the grant money. They are not to be trusted, deputy national security adviser K.T. McFarland suggested last month by giving Trump a print-out of a purported 1970s TIME magazine cover predicting a coming ice age. (The cover is an internet fake that has been circulating for years. It was cited last year by White House strategist Stephen Bannon in a radio interview he did while running the conservative media outlet Breitbart.)

Technically, as a “luke warmer,” I won’t address the totality of Shade #1. I will just debunk Ms. Lavelle’s smarmy psuedo-intellectual handling of the 1970’s global cooling scare.

Well, I suppose that Ms. Lavelle is correct that a 1970’s TIME magazine cover did not predict “another ice age.” The prediction (sort of a prediction) was from a 1974 TIME magazine article…

The full text of the article can be accessed through Steve Goddard’s Real Science.

Dan Gainor compiled a great timeline of media alarmism (both warming and cooling) in his Fire and Ice essay.

Then there was Newsweek…

And who could ever forget Leonard Nimoy’s 1977 narration of In Search of The Coming Ice Age?

While the 1977 TIME cover was a fake, this 1975 magazine cover and article were very real:

Energy and Climate: Studies in Geophysics was a 1977 National Academies publication. It featured what appears to be the same temperature graph, clearly demonstrating a mid-20th century cooling trend…

The mid-20th Century cooling trend is clearly present in the instrumental record, at least in the northern hemisphere…

Why are people like Ms. Lavelle so obsessed with denying this? Is the mid-20th century cooling period so “inconvenient” that it has to be erased from history like the Medieval Warm Period?

So, in accusing K. T. McFarland of Shade #1 of Climate Denial, Ms. Lavelle engaged in climate denial… Irony is so ironic!

The Other Shades of Climate Denial

Debunking Shade #2 “It’s Not Our Fault”

It’s not all our fault. The mythical 97% consensus only asserts that it’s at least half our fault. We certainly could be responsible for some of the warming that has occurred over the past 150 years. The point is that the warming observed in the instrumental temperature record doesn’t significantly deviate from the pre-existing Holocene pattern of climate change…

Over the past 2,000 years, the average temperature of the northern hemisphere has exceeded natural variability (+/-2 std dev) 3 times: The Medieval Warm Period, the Little Ice Age and the modern warming. Humans didn’t cause at least two of the three and the current one only exceeds natural variability by about 0.2 C. And this is a maximum, because the instrumental data have much higher resolution than the proxy data.

Uhmmmm… It *is* too uncertain.

Melting icebergs are NOT…