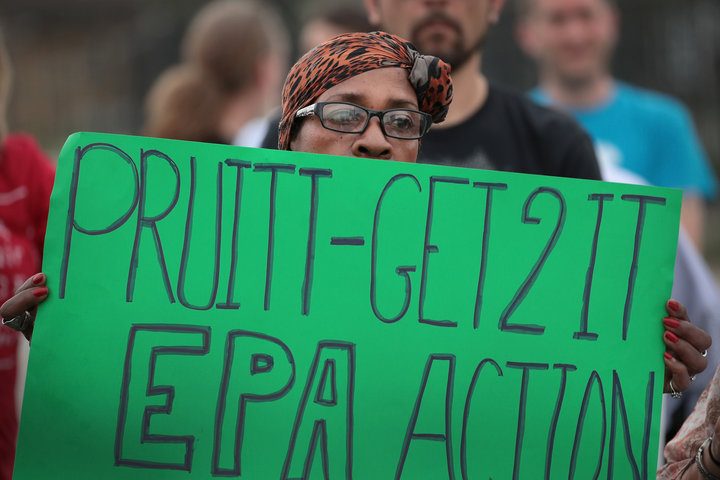 EPA chief Scott Pruitt has launched a new public relations campaign to explain his actions as a “Back to Basics Agenda.” The more accurate title of Pruitt’s campaign would be “Back to Pollution.”

How far is Pruitt willing to go to reshape the mission of the Environmental Protection Agency? Apparently, it starts with redefining the “environment” that EPA is charged with protecting. According to EPA’s press release, Pruitt wants EPA to focus on creating “an environment where jobs can grow.”

Missing from Pruitt’s announcement: any mention of protecting public health, which has historically been the centerpiece of EPA’s mission from the very beginning, as still captured (for how long?) on EPA’s website:

Pruitt chose Consol’s Bailey Mine Complex in Pennsylvania to kick off his new PR campaign. Pruitt neglected to mention that the mine operators were caught illegally dumping pollution into the Ohio River, and they agreed to pay a $3 million fine in 2016 for violating the Clean Water Act. Thanks to the work of EPA’s enforcement office, working together with Pennsylvania and the Justice Department, illegal dumping was stopped and the polluter was held accountable.

That formula would change under Trump. Under Trump’s budget proposal, enforcement of pollution violations under the Clean Water Act and Clean Air Act are on the budget chopping block. According to the New York Times:

“Sharp cuts in the agency’s enforcement programs could curtail its ability to police environmental offenders and impose penalties. The budget proposal reduces spending on civil and criminal enforcement by almost 60 percent, to $4 million from a combined $10 million. It also eliminates 200 jobs.”