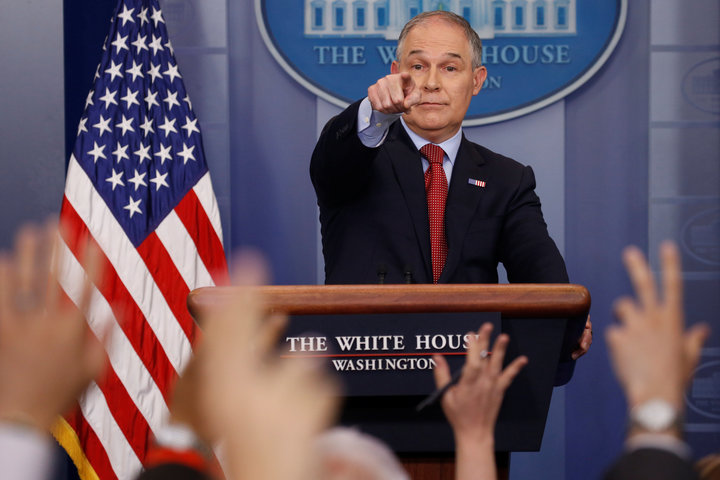 One month after taking office, Environmental Protection Agency chief Scott Pruitt hosted BP’s U.S. chairman at his office to discuss issues the company “works with” the agency on. The next day, Pruitt met with two top executives from Chevron Corporation to discuss “regulatory reform.” The day after that, he spent two hours mingling with 45 CEOs from oil and gas companies at the Trump International Hotel in Washington, D.C.

It’s not unusual for the nation’s top environmental regulator to meet with leaders of some of the industries he or she regulates. But Pruitt, who came into the agency with a reputation for siding with fossil fuel interests, has virtually ignored conservation and public health advocates, according to calendars released under the Freedom of Information Act and first reported by E&E News.

Pruitt’s calendars show far fewer meetings with environmental and public health advocates. On Earth Day, the agency issued a press release feting the “great natural resources that the United States is blessed with” and touting a meeting with The Nature Conservancy and the National Audubon Society. A church, an interfaith group and the Indiana chapter of the NAACP were also included on a list of 25 organizations Pruitt met with that an EPA spokeswoman provided to HuffPost.

That lopsided courting of fossil fuel executives lays bare a major shift in how the agency is operating, former EPA officials told HuffPost. It also demonstrates what one legal scholar described as the “fatal flaw” in administrative law that allows an industry-friendly agency boss to buddy up to polluters with little oversight.

“It’s not surprising,” Liz Purchia, who left her post as the EPA’s communications director under President Barack Obama in January, told HuffPost. “It’s confirming everything that people who opposed Scott Pruitt all had expected.”

Pruitt spent his six years as Oklahoma’s attorney general suing the EPA to block environmental regulations more than a dozen times, often at the behest of big oil and gas firms. In 2011, he allowed Oklahoma’s biggest natural gas driller to write a complaint to the EPA on his letterhead, which he then signed and sent as his own with few changes.

Thousands of emails released just before Pruitt’s confirmation as the EPA’s 14th administrator revealed a deep, chummy alliance with oil, gas and utility companies forged during his years as Oklahoma’s attorney general. His administration would amount to a “fox guarding the henhouse,” League of Conservation Voters President Gene Karpinski warned in January.

Pruitt battled the Obama EPA’s power plant rules on lawyerly technicalities, arguing that the agency had overstepped its regulatory authority and insisting that any need to curb global warming was beside the point. He is similarly operating within the bounds of the law now, legal scholars said.

Agency chiefs are allowed to seek outside counsel through federal advisory committees, which must report their meetings to the public under federal law. The EPA has 23 committees, including a financial advisory board, scientific counselors and a council devoted to the Great Lakes.