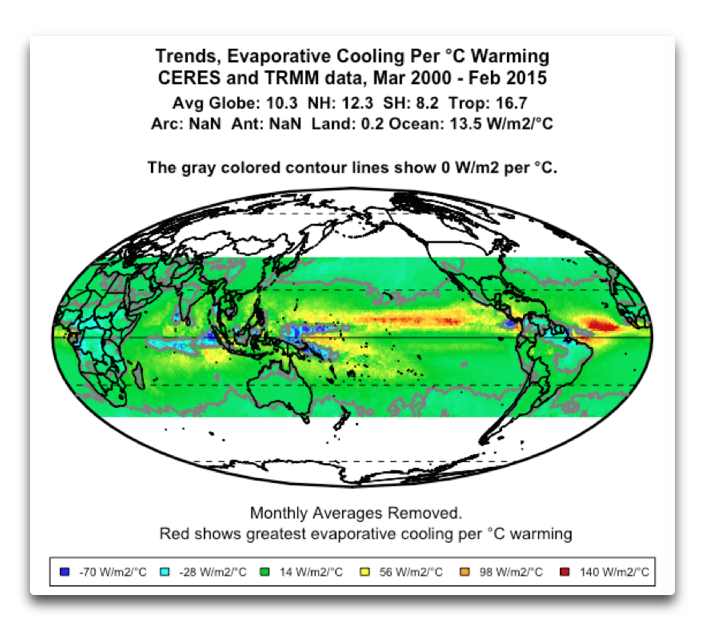 I got to thinking again about the question of evaporation and rainfall. I wrote about it here a few years ago. Short version—when the earth’s surface gets warmer, we get more evaporation and thus more rainfall. Since what comes down must go up, we can use the Tropical Rainfall Measuring Mission (TRMM) satellite rainfall data to calculate the corresponding rainfall-related evaporation.

Now, I’d gotten that far in my previous analysis, but I was stymied by the incomplete coverage. At the time I said:

As noted above, the TRMM data covers about two-thirds of the surface area of the Earth. From appearances, unlike in the tropics, the correlation of evaporation and temperature is negative in the unsurveyed areas of both the northern and southern extratropics. The grey line at about 30°N/S shows where the relationship goes negative. This is no surprise. In the extratropics, rain is associated with cold fronts instead of being associated with thermally driven tropical thunderstorms. As a result, although the overall average change in cooling shown in Fig. 6 is 11.7 W/m2 per degree of warming, I suspect this be largely offset once we have precipitation data for the currently unsurveyed areas.

So my quick guess at the time was that overall the value might be around zero. However, this question continued to bother me. So I started thinking about how I could estimate the trends in the areas not covered by the TRMM data. I began by looking at the average evaporative cooling by degree of latitude. Figure 2 shows that result.

This was quite encouraging. I had previously assumed that as we went towards the poles, the trend would continue to go more negative. But both in the northern hemisphere (positive latitude) and the southern hemisphere (negative latitude), the trend is heading back towards zero as we go towards the poles. This would indicate that the values nearer to the poles might be around zero.

Next, I took a different look at the data. Figure 3 shows a scatterplot of the evaporative cooling trends versus the average surface temperature. It shows on a gridcell-by-gridcell basis the relationship between the evaporative cooling trend for that gridcell versus the long-term temperature of that gridcell. There are 28,800 gridcells shown in Figure 3.

Figure 3. Scatterplot of the evaporative cooling trends versus the average surface temperatures, 40° North to 40° South.

Now, this is quite revealing. It shows that…