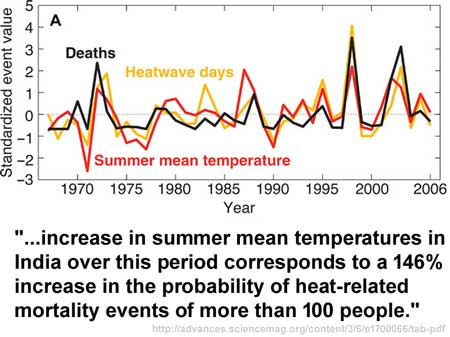 The venerable NY Times carries this headline: “In India, Slight Rise in Temperatures Is Tied to Heat Wave Deaths”.

The study cited makes this conclusion:

The rest of the study, the story and the claims are the result of questionable statistics, which even the study authors admit (or brag) are “novel”.

The whole case can be made using nothing but the study’s figures:

The authors insist “Figure 1A shows that summer mean temperatures have increased substantially from 1960 to 2009. The time series exhibits a statistically significant (95% confidence interval) upward trend confirmed using the Mann-Kendall (MK) trend test. The accumulated intensity, count, duration, and days of Indian heat waves have also increased over the analyzed time period over most of the country and especially in the northern, southern, and western parts of India (Fig. 1, B to E).”

Temperatures increased substantially if we look at a National Average (mean) — the actual increase in the National Mean Summer Temperature trend is from 27.55 to 27.9, an increase of 0.35 °C ) or 0.63 °F. (Note: not the claimed 0.5 °C, which is a rounded up exaggeration) In the fifty (50) years of the data set, this gives an increase of 0.07°C/decade. This increase we will simply have to accept as valid, though we must point out that the National Average Summertime Surface Air Temperature may not be the best metric to use to judge what are obviously very localized heat wave events, according to the sub-panels B thru E, and may be skewed by UHI effects in India’s massively huge urban centers. India is huge and geographically diverse — from the tropical southern provinces to high Himalayan plateaus — making a “national” average temperature meaningless in this context.

The rest of the story is contained in these two excerpts from Figures 2, 3 and 4:

The primary feature of these two graphs is that they are long-term flat, with a couple of spikes and dips.

Look back up at the National Average Temperature graph — it shows a particularly low national temperature in 1971, which shows up the these two graphs as extremely low population-weighted and income weighted heat wave deaths. And we see the existence of…