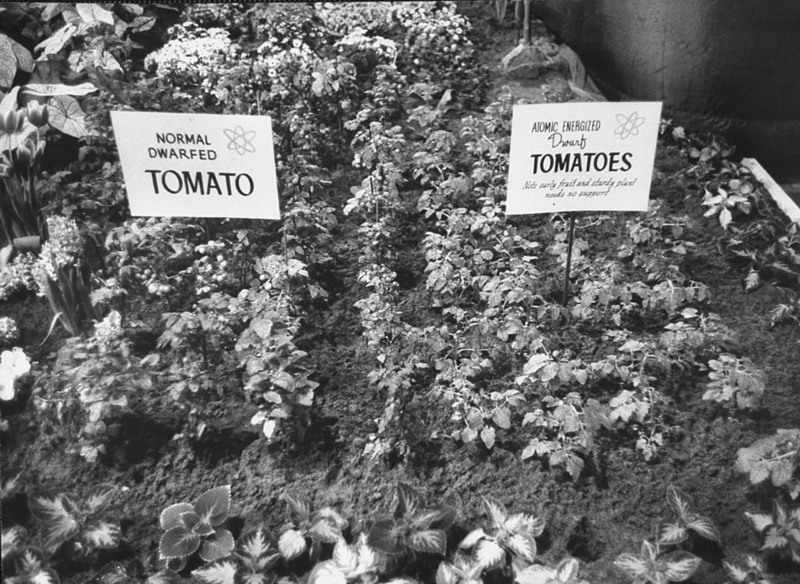 In the early 1960s at garden shows across the United States and in the U.K., you’d see more than your usual roses and begonias—you could see science at work. Giant peanuts. Huge tomatoes endlessly growing from a single stock. Multi-colored flowers on a single bush, or seeds that promised to grow an elusive blue rose. Genetic anomalies abounded in displays of flowers arranged to resemble protons and neutrons, advertising a new wave of gardening techniques. Horticulturists lovingly called these “atomic gardens” or “gamma gardens.”

Each of the plants in a gamma garden was a mutant, grown with the help of radiation. They were part of a new, experimental trend in horticulture that was meant to devise new plant breeds and revamp the then-sordid reputation of nuclear technology. From the 1950s into the 1970s, radioactive plants grew both in labs and in amateur gardeners’ backyards.

The mechanism of a gamma garden was simple: radiation came from a radioactive isotope-laden metal rod, which jutted out of the garden’s center and exposed the plants to its silent rays. Radiation slowly bludgeoned the plant DNA like a hammer and changed how genes were expressed.

The largest, usually lab-based gamma gardens could span up to five acres, with plants arranged in sections, like a pizza. The plants nearest to the radioactive source died, and the next farthest grew tumors—but in the next group the mutant action began to show. Once the radiation caused a desirable trait, like fatter tomatoes or larger rosebuds, the mutant seeds were bred to form more super-plants or were irradiated again to further change the DNA. In home gardens, enthusiasts normally used pre-irradiated seeds and bred their plants for mutated traits, but hardcore gamma gardeners obtained a governmental license to use cobalt-60, a solid radiation source, to irradiate plants and seeds.

According to Helen Anne Curry in Evolution Made to Order, “From the start, the assumed appeal to growers of using irradiated seed was less the promise of prettier or easier-to-manage garden plants and more a shared curiosity about the effects of radiation and the aspiration to produce something novel.” The promise of new plants was not lost on the horticultural hobbyist, though; by 1961, Home and Garden shows across the United States and the U.K. were decorated with showy displays of “Atomic Age Gardens,” with multi-colored begonias and giant peas on display, and instructions for building your own radioactive garden nearby.

While new and exciting plants were a focus of atomic gardening, the trend started with scientists who aimed to build a new relationship between nuclear energy and the world. Nuclear fission had a deservedly terrible reputation post-World War II, but from the 1950s through the early 1970s scientists were interested in using radiation for good. There must, they believed, be a way for our power over the atom to produce some positivity in the world, and the solution? Mutant plants. Atomic gardening could speed up evolution, and seemed like a solid answer to the problem of food shortages and plant disease.

The idea caught on: an August 1955 New York Times article exalted the possible benefits of the new science with the subheadline “Irradiated Seed Will Make The Desert Bloom,” highlighting scientists in Geneva and the U.S. who were pioneering some of…