How to deal with damaged, “water-repellant” soil 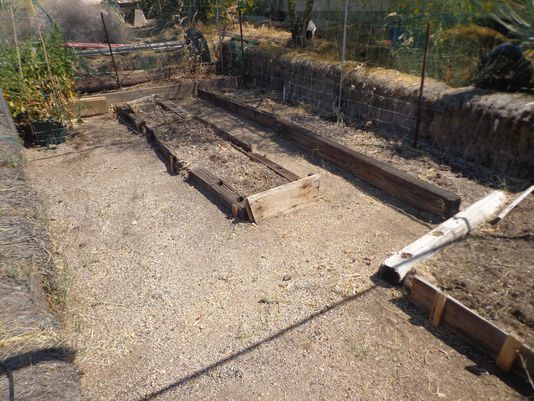 When you move to the desert, nobody tells you about the problems with potting soil. Most folks here never learn the truth about what happens to them in a climate so extreme. Nobody tests their potting soils against months of 110° topping out at 120+, each and every summer. Such conditions dry these soils out to such an extent that the microbes die and the peat and fine ground bark become thoroughly dehydrated.

Peat is a curious material. It is able to absorb and hold a great deal of moisture over quite a long time, hence the water-holding value in potting soils. So long as your potting soil remains moist, it is highly absorptive through and through.

When ground peat dries out though, it shrinks and becomes hydrophobic. This means it literally repels water. It’s not uncommon to discover drip irrigation will flow across the potting soil surface and out of the root zone of overly dry soils. It often flows out through the shrink gaps between soil mass and the edge of a bed or pot. In the meantime the plants are suffering epic drought despite our best intentions.

Another common scenario relates to potting soils used to grow the plants we buy. This is particularly common with container grown trees and shrubs because we transplant the grower’s potting soil too. When these peat or bark based soils are planted into our porous desert ground, water much prefers to penetrate the sand rather than fight with peat. Over time the center will become bone dry even with irrigation, but increasing water applications just means more runoff deeper down, beyond the reach of roots.

Tip: Don’t open your potting soil bags until the day you use them to avoid premature dehydration in the desert air. Reseal leftovers in an airtight plastic container to maintain moisture.

The most effective way to rehydrate peat is to take your time. You must keep moisture in that peat potting soil zone long enough for gradual absorption…