How to spend the night in a quintessential British garden 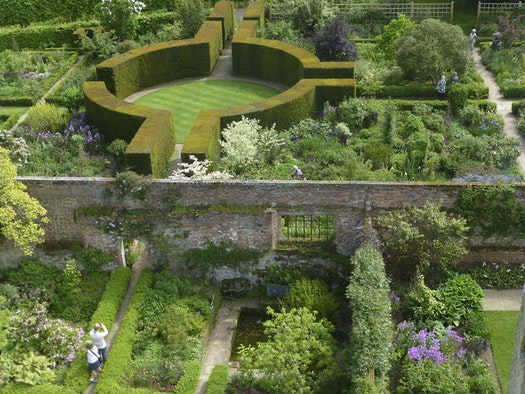 It’s early in the morning on a May day at Sissinghurst Castle Garden, in southern England, but Lucie Willan is already starting work on her designated plot of land, past banks of white flowers that sprout up like one big billowing cloud. That’s to be expected, though. Like all the gardeners at Sissinghurst, she is driven by a profound sense of mission.

“I used to be an art specialist at Christie’s Auction House,” she tells me as she weeds. Why the career shift? It turns out it was seamless. “There are eight gardeners here at the moment and we are all determined to keep Sissinghurst thriving, because it’s a living work of art in itself.”

For the dedicated garden lovers who fan out across the English countryside in the spring and summer, sniffing the perfumed air, the sentiment won’t come as a surprise. Sissinghurst is considered one of the great quintessentially British gardens. The carpet of blossoms, planted by writer Vita Sackville-West and her diplomat husband, Harold Nicolson, in the 1930s, eschews French formality — those tight, rigid plots of flowers — for a sense of ripe wildness.

Even those indifferent to the perfect plot of dahlias will find enough to enjoy here; the surrounding shire of Kent offers the classic English trinity of pastoral villages, castles and stately manors, and even more gardens. And there is a new reason to make the trek: The National Trust has recently started renting out the Priest’s House, tucked into Sissinghurst Gardens themselves. That means for the first time you can book a mini manor for the week, or a weekend, and have the entire, blooming garden to yourself, once the gates close to visitors at dusk.

The Priest’s House sleeps six and is pretty much everything you’d want from an English bolt-hole. It’s also cheaper than the bleakest B&B if you break it down by person, which is what my partner, Thomas McGhee, and I did when we came down from London with three friends.

We took a one-hour train ride south from London to Maidstone, picked up a rental there and finished the trip by car. The minute we walked into the 16th-century red brick rental, we knew the trek was worth it.

“This kitchen!” exclaimed our friend Kathy, designated cook in the group, standing beside a brick oven big enough to spit-roast a brontosaurus. There were three bedrooms, a free-standing ceramic tub, beamed ceilings, mullioned windows, a living room featuring pillowy sofas and a fireplace. The climax: a library off the living room stocked with real books, an antidote to those faux libraries of color-coordinated volumes, the book literally reduced to its cover, that pop up in too many boutique hotels now.

Those books are testament to the garden’s own roots. Sackville-West, who wrote her Edwardian novels in the brick tower that juts up in the garden’s center, was a close friend and onetime lover of Virginia Woolf, and the gardens occasionally hosted the pastoral wing of Bloomsbury bohemia. Nicolson penned his own vaunted biographies and diaries in the South Cottage. In other words, these weren’t two amateurs haphazardly throwing some lily seeds around. Bringing their two big brains together, they approached the gardens as a joint masterwork and, ultimately, as a love letter to each other.

“What happiness you and I have derived from the garden,” Harold wrote Vita in 1955. “I mean real deep satisfaction and a feeling of success. It…