In Search of the 3% Renewable Energy ‘Tipping Point’. 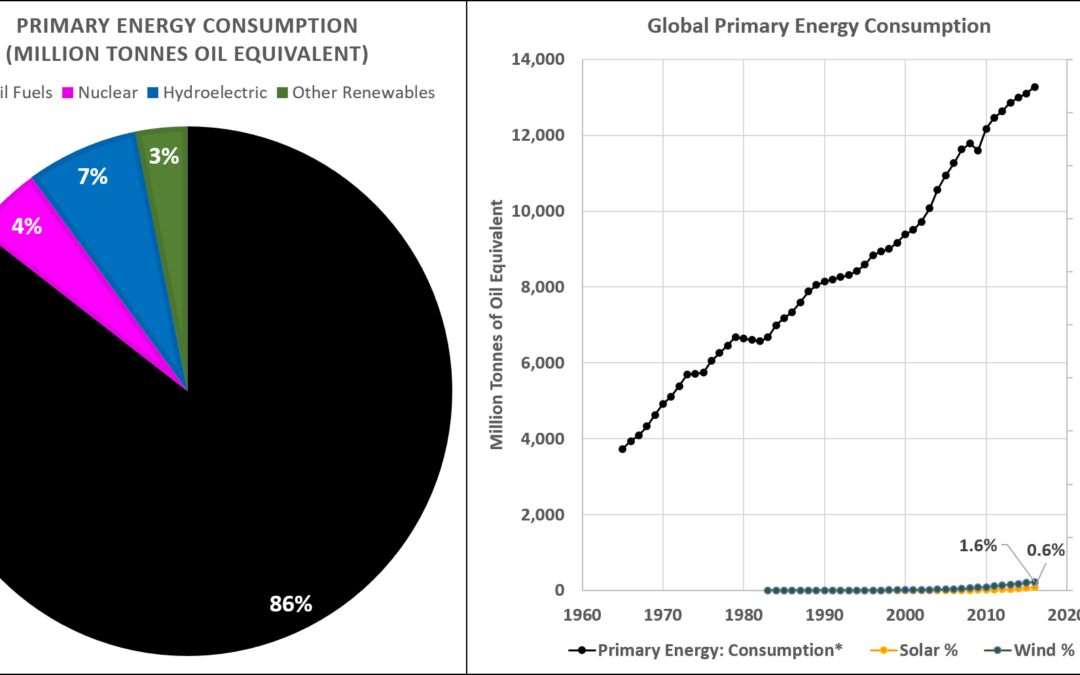 In order to search for the 3% Renewable Energy ‘Tipping Point’, we must ascertain a definition of the phrase…

: the critical point in a situation, process, or system beyond which a significant and often unstoppable effect or change takes place

Let’s see if we can find a “critical point in a situation, process, or system beyond which a significant and often unstoppable effect or change takes place” anywhere in this pile of greenschist…

Renewable energy at a ‘tipping point’

A SHIFT IN THOUGHT Washington may be showing less interest in alternative fuels, but the worldwide picture is dramatically different.

The Monitor’s Editorial Board

JUNE 26, 2017 —Should the world promote economic growth or fight climate change? That model of “either/or” thinking may be losing its validity faster than even some experts have imagined.

While fossil fuels – coal, oil, gas – still generate roughly 85 percent of the world’s energy supply, it’s clearer than ever that the future belongs to renewable sources such as wind and solar.

The move to renewables is picking up momentum around the world: They now account for more than half of new power sources going on line.

“While fossil fuels – coal, oil, gas – still generate roughly 85 percent of the world’s energy supply,” it’s clear that wind (1.6%) and solar (0.6%) are part of the “other renewables” that accounted for 3% of global primary energy consumption in 2016.

President Trump has underlined fossil fuels – especially coal – as the path to economic growth. In a recent speech in Iowa, a state he won easily in 2016, he dismissed wind power as an unreliable energy source.

But that message did not play well with many in the Hawkeye State, where wind turbines dot the fields and provide 36 percent of the state’s electricity generation – and where tech giants such as Facebook, Microsoft, and Google are being attracted by the availability of clean energy to power their data centers.

I wonder how the “tech giants such as Facebook, Microsoft, and Google” will power their Iowa data centers with “clean energy,” when nearly half of it comes from coal?

The question “what happens when the wind doesn’t blow or the sun doesn’t shine?” has provided a quick put-down for skeptics. But a boost in the storage capacity of batteries, and a dramatic drop in their cost, is making their ability to keep power flowing around the clock more likely.

And Santa Claus is coming to town. We’ll put batteries in the speculative future ‘tipping point’ category. With an up-front price $200/kWh, batteries need a much deeper “drop in their cost” because the “ability to keep power flowing around the clock” needs to actually be certain, not just “more likely.”

Is it just an inability to conjugate verbs with these people?

The advance is driven in part by vehicle manufacturers, who are placing big bets on battery-powered electric vehicles. Although electric cars are still a rarity on roads in 2017, this massive investment could change the picture rapidly in coming years. China, whose cities are choked by air pollution, may lead the way.

“Renewables have reached a tipping point globally,” sums up Simon Virley, who studies the world’s energy markets for the international accounting firm KPMG.

“Could change the picture rapidly in coming years” does not equate to having “reached a tipping point globally.” Furthermore, “battery-powered electric vehicles” aren’t going to put a significant dent in oil consumption for two reasons:

Even ARS Technica is starting to catch on:

According to a recent report from the International Energy Agency (IEA), 2016 was a record year…