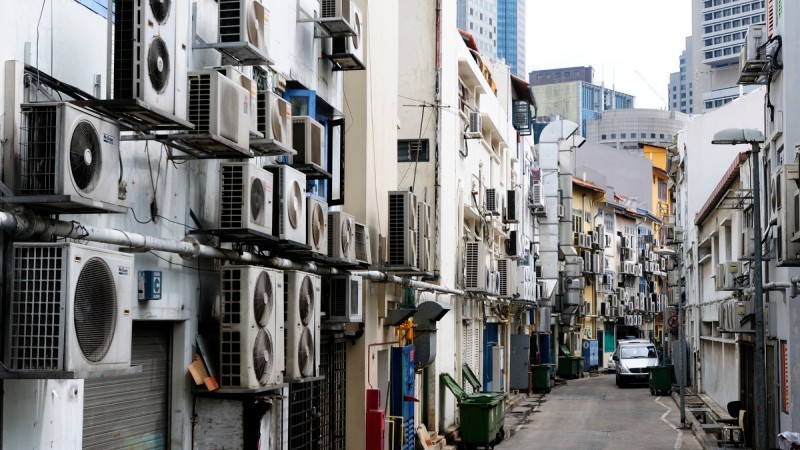 Everything is a quadrangle in Daikin India’s manufacturing facility. Its clean straight lines are at odds with the dusty and sprawling landscape outside the facility, 120km from India’s capital.

It is 37C outside, unbearable for many in the Western hemisphere, but about the norm for Rajasthan, in western India. Here temperatures reach up to 50C. Across the country, people live in conditions where temperatures are above 24C more than half of the year.

As India’s population of 1.3 billion grows richer, they will want access to cool air.

Only 4% of Indians have access to air conditioning today, but that number is rising fast. Between 2003 and 2013, The Indian Refrigeration and Air-conditioning Manufacturers’ Association recorded a 20% annual growth rate. This makes the Indian market absolutely pivotal in the years to come for businesses, and also pivotal for the environment as hundreds of million of people will buy their first air conditioner.

AC is a driver of climate change for two reasons: it uses a lot of electricity, mostly generated by coal in India, and the widely used coolant chemicals hydrofluorocarbons (HFCs) are themselves potent warming gases.

A global deal to phase down HFC production agreed in Kigali in October 2016 is expected to avert up to 0.5C of warming. Its implementation depends on manufacturers like Daikin.

Researchers estimate that using only less-polluting coolants and energy efficient kit in 2030 would prevent roughly twice the amount of emissions saved by India’s 100GW solar target. It would reduce the number of power stations needed to meet peak electricity demand, the US-backed analysis from Lawrence Berkeley National Laboratory explains.