‘Isis WILL lose’: Tearful well-wishers lay a blanket of flowers at London Bridge and Borough market 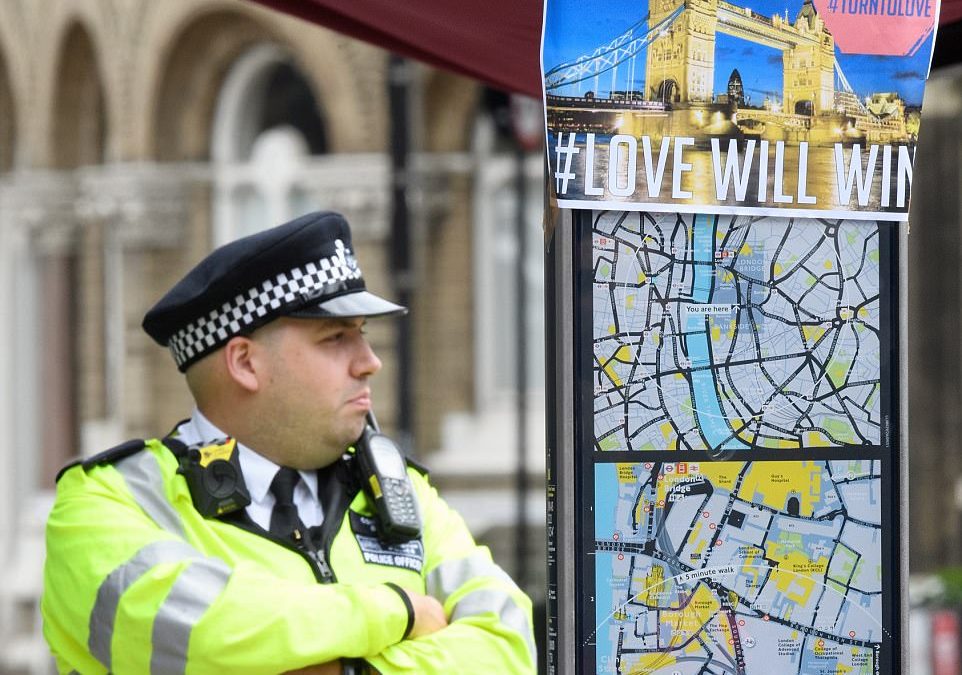 Tearful well-wishers have laid a blanket of flowers in memory of the seven victims who were killed in last night’s terror attacks at London Bridge and Borough market.

A poignant sign reading ‘ISIS will lose, love will win’ was among dozens of tributes left at the scene the morning after three jihadis launched a crazed knife frenzy in the capital.

Children and the elderly were pictured placing flowers – with many mourners struggling to hold back tears.

Police officers helped to lay the bunches after collecting them from the edge of the cordon – while a couple were pictured in a poignant embrace behind the tape.

An emotional City of London policewoman was also pictured welling up at the scene of the attack in which two fellow law enforcement workers were injured.

A British Transport Police officer was stabbed in the face, head and leg while trying to stop the deadly attack – and an off-duty constable from Metropolitan Police was also hurt.

BTP Chief Constable Paul Crowther said: ‘Having visited the officer in hospital shortly after he was admitted for treatment, I was able to hear his account of what happened last night.

‘It became clear that he showed enormous courage in the face of danger, as did many others who were at the scene and rushed to help.

‘Although he is seriously unwell, he was able to recount how he faced the attackers armed only with his baton, outside London Bridge station.’

It comes after shocking footage showed the three London Bridge striding calmly as they hunted for more victims during their terrifying rampage last night.

The attackers, who were wearing fake suicide vests, were filmed sauntering through a deserted Borough Market just moments after they abandoned the white van used to mow down pedestrians on London Bridge.

Shortly after the trio began stabbing revellers at random inside packed bars and pubs, with dozens of victims suffering wounds to their faces, necks and chests. The video was taken sometime during this second phase of the atrocity and shows the attackers coming within feet of the Market Porter pub, where dozens of revellers hid in fear.

Moments after the video was taken, all three suspects were shot dead by police – just eight minutes after the first emergency call was received. It emerged today that a member of the public was shot after being caught in the police crossfire.

Meanwhile police have arrested 12 people, including four women, who were into custody in a dramatic raid at block of flats where one of the London Bridge terrorists reportedly lived. Neighbours reported hearing shots being fired as heavily armed police stormed a tower block in Barking, east London, at around 7am this morning.

Elsewhere armed police and forensic officers were seen scouring the scene at London Bridge and Borough Market, where three terrorists left a trail of death and destruction when they went on a van and knife rampage.

Speaking outside No 10 today, Theresa May said the attack is not directly connected to the Manchester bombing last month or the Westminster atrocity in April but that ‘all three are linked by the single evil ideology of Islamist extremism’.

The Prime Minister insisted ‘enough is enough’ as she vowed to introduce tougher punishments for those connected to extremism.

Speaking at a press conference today, Mark Rowley – Assistant Commissioner for Specialist Operations in the Metropolitan Police Service – revealed eight of his officers fired bullets, saying it was a necessary course of action.

One of the bullets is said to have hit a bystander in the head and the incident is being investigated by the Independent Police Complaints Commission.

Mr Rowley said: ‘I’m not surprised with what they must have feared were three suicide bombers the firearms officers fired an unprecedented number of rounds to be completely confident they had neutralised the threat that those men posed.’

A doctor from the Royal London Hospital, Malik Ramadhan, told The Guardian the member of public was a man who was shot in the head but that he is ‘absolutely not dying’ and is expected to make a full…