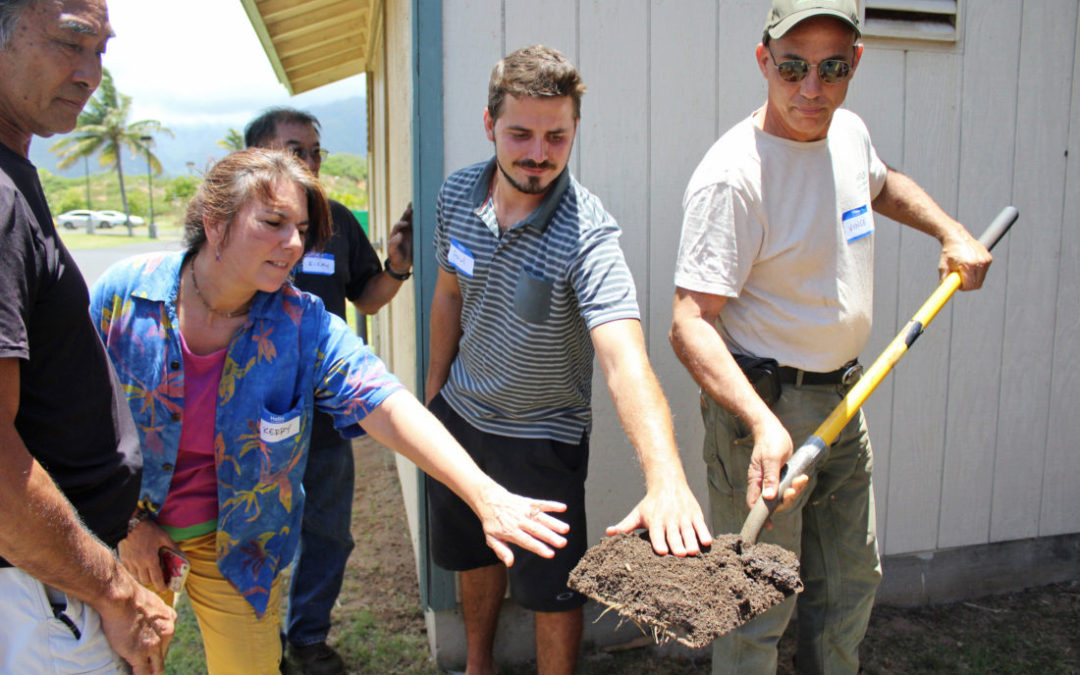 Hawaii Farmers Union United President Vincent Mina (right) holds up a shovel full of hot soil for Kerry Beane and Paul De Filippi to touch during a workshop Sunday on Korean natural farming techniques at the University of Hawaii Maui College. A mix of fermented ingredients including white rice, brown sugar and a mill-run of wheat were placed in the soil to help culture microbes. The Maui News / COLLEEN UECHI photo

KAHULUI — The world of Korean natural farming is like a glimpse into a mad scientist’s lab. At one end of the table, Ricky Apana is toasting crushed eggshells in a giant wok while Seth Raabe pours charred animal bone bits into a jar. Vincent Mina is sprinkling brown sugar over smashed banana peels.

But there’s a science behind the curious concoctions, and it all comes down to making healthy soil naturally, cutting down on “inputs” like fertilizers that are among the costliest investments for farmers.

“It’s empowering the farmer on how to recycle his nutrients back onto the farm,” said Mina, president of Hawaii Farmers Union United. “Empowering the farmer to be connected to his plants more instead of just throwing some granules down and not really knowing what’s going on.”

At the University of Hawaii Maui College on Sunday, Mina, Mahele Farm manager Raabe and Maui Bio Char owner Apana were finishing a two-day workshop with farmers on the techniques pioneered and popularized by South Korean master farmer Cho Han-Kyu.

The heart of the approach lies in applying natural and fermented “preparations” to plants at different growing stages, explained Raabe, who’s certified in Korean natural farming.

What drew some farmers Sunday was the simplicity of the ingredients, things like leftover bones, bananas, vinegar, brown sugar and rice. For example, fermented plant juice only requires weeds and brown sugar, which creates a liquid that can be applied during the…