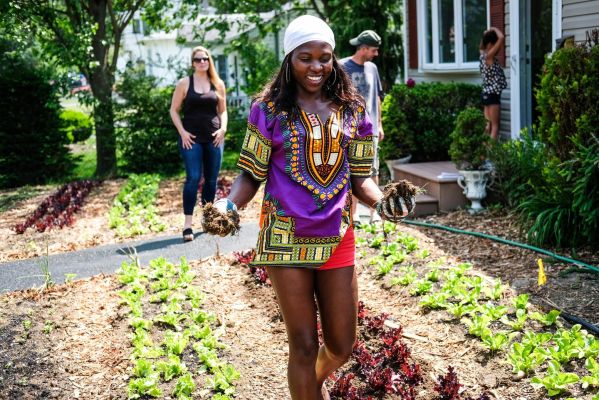 A Long Island couple is aiming to grow the local food movement while bringing it even closer to home — straight to homeowners’ front lawns.

Rosette Basiima Adams, 34, developed a green thumb in her native Uganda, where she began farming on her family’s plot around age 4. The idea of growing her own food was familiar, as she didn’t encounter grocery stores until immigrating to Long Island nearly a decade ago.

After working at a Community Supported Agriculture farm in Amityville, she decided she and her husband, James Adams, could do it themselves. Adams, 42, who quit his job at a swimming pool company last year, said he was looking for a way to “do something meaningful” and started researching urban farming.

To bypass the high cost of farmland, the Adamses searched for residents willing to forego traditional clean-cut landscaping in favor of edible vegetation. They put up fliers in local shops advertising the unusual exchange. They are currently farming on two properties. The Adamses plant and tend the crops and the residents get a portion of the output.

“I believe the whole agricultural…