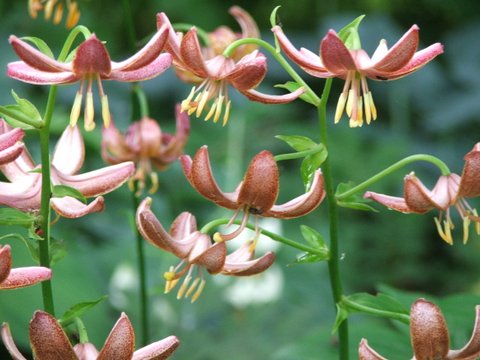 ‘[John Donne’s] weathers were always those of body and mind. His sun was a lover, a human mistress, to whom the burning star in the sky was “a lesser sun”. Vapours were those given off by the loving heart; rain was the feverishly imagined liquefaction of flesh and soul.’ ~ Alexandra Harris, Weatherland: Writers and Artists under English Skies.

Most discussions of lily beetles are a little helpful and considerably depressing.

Many gardeners have abandoned growing lilies because the battle against the beetles is time- consuming and messy. But may I suggest that if (a) you have lots of free time (as I do) and (b) are willing to get some blood on your hands (as I am) that all is not lost. Many hundreds of lilies grow here so you will understand that we have a major interest in this problem. Here are some suggestions.

LBs do not like to get up early nor stay up late; not much point in sailing into the garden at dawn or dusk. Nor are they fond of cold weather, so you can stay inside with a book when it’s unpleasant for you, as for them. Don’t worry if you lunge for a beetle and miss it. True, it will disappear, but my experience suggests a heart-warming conclusion: a fallen beetle is as good as dead, and will rarely, if ever, return to attack that lily. For reasons that probably have much to do with my eyesight, LBs congregate

along paths and walkways where they are easily detectible and accessible; they appear to enjoy – up to a certain point – human company.

What I believe critical is to go after them before they are comfortable. I see very little of the disfiguring mess that is described in many reports and I think that is because I tackle the beetles when they first appear (typically on fritillarias, especially the Crown Imperial, Fritillaria imperialis,[1] though other species, such as F. pallidiflora, below, are not exempt).

In cool spring sunlight they are often somnolent and can be picked off with a confident, swift movement. Later, as they become more elusive, I adopt a slightly different technique, which is to slide firmly my first and second fingers on one hand around the lily stem below where the LB is sitting so that should I miss it with my other hand it cannot fall to the ground but falls, wriggling, somewhere in the palm of my hand or between my fingers. It is crucial then that you abjure all sentimentality, that you forget about plunging the poor creature (it means no ill) into soapy water or beer suds or

maple syrup, but that you swiftly bisect it with a sharp fingernail. You can then discard the bloody fragments as a warning.

Things are a bit more complicated when there are two or more LBs on the same plant. If they are, as they often are, in a loving embrace, you can attempt to seize them as a group. When they are on widely separated leaves you may have to make a decision as to which is to be captured and which to be spared, a decision which can easily make for sleepless nights.

I roam through the garden once or twice a day with LBs specifically in mind but I also watch out for them as I make my way to other tasks. The lily foliage will often have small holes in it (which could come from a variety of foes) but is seldom ugly, especially as the lily grows in height and strength. I have no hope of defeating the LBs but, for the moment, we can continue to enjoy lilies in the garden.

One of the uncanny coincidental pleasures for me during the continuously rainy days of April was to find myself in a parallel immersion, that of Alexandra Harris’s Weatherland: Writers and Artists under English Skies. Harris, who is in her mid-thirties, a Lecturer at the University of Liverpool, has had a most productive half-dozen years, beginning with Romantic Moderns (2010). I came across a review, read the book, and was entranced. It deals with a wide range of English artists in the first half of the twentieth-century – poets, painters, novelists, sculptors, composers, even gardeners – who thought of themselves and were publicly identified as ‘modern’, seeking to break, in a variety of ways with what they conceived of as the orthodoxy of preceding centuries, but in whom, just as they were hailed as modern pathbreakers, the dissonance and…