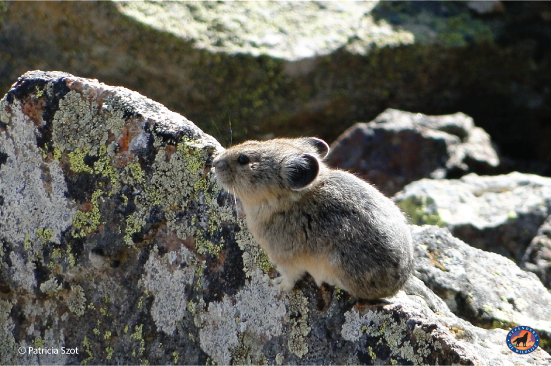 On the trail on the tiny mountain-dwelling mammal hit hard by the effects of climate change.

For anyone who has spent time out West at high elevations scrambling around talus mountain tops, the ‘eep, eep’ of the America pika is a familiar and welcome sound. The small mammal, most closely related to rabbits and hares, makes its home in the nooks and crannies of rocky slopes that provide cover from predators and offer cooler temperatures during summer. This objectively cute species has carved out a niche is these areas, but as the effects and impacts of climate change intensify, these alpine ecosystems and the species that have evolved with them are under increasing threat, and no animal better exemplifies this looming problem than the American pika.

Unlike other alpine species, pikas do not hibernate during winter. They depend on thick fur and deep winter snows to act as insulation against high winds and extreme temperatures. Although it may sound counterintuitive, when snow fills in the rocky nooks where pikas reside, it keeps them warm and protected from whipping winter winds when temperatures drop far below zero. With less snow falling on average, pikas have become exposed to the elements and are less able to survive the cold season.

During the summer season, as temperatures increase, pikas once again become susceptible to the elements. They don’t shed that thick coat even in summer, and due to their diminutive size, they have a tough time regulating their body temperatures. When outside temps climb above 75 degrees Fahrenheit, they can easily overheat and die. In the past, these alpine areas rarely reached above 70 degrees Fahrenheit, but with global temperatures consistently breaking records on an annual basis, these formerly cool areas are getting hotter and hotter, making it tough for pikas to hold on.

Furthermore, while some species can migrate and find new, better suited areas, tiny pikas never move very far. Even if they were better travelers, the valleys between mountaintops are usually too warm for them, which means their only option is to move upslope seeking cooler temperatures. The problem with that of course is that eventually they will run out of mountain. Whereas habitat fragmentation from development has been the leading cause for most species decline, pikas are unique in that the remoteness of their preferred habitat has kept it safe. Pikas still occupy the same talus slopes they’ve lived in for hundreds of years, so unlike other species, pikas largest, almost singular threat comes from the effects of our changing climate.

Because pikas are such important harbingers of climate change, researchers…