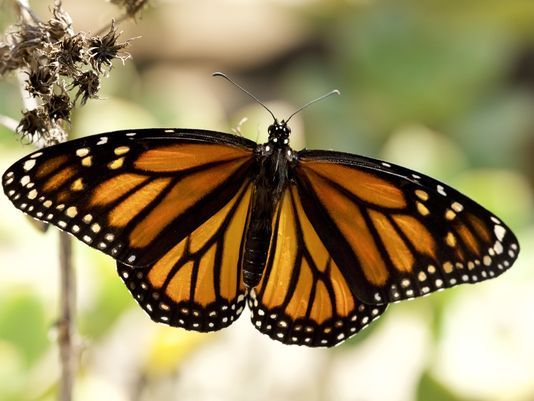 My first encounter with butterfly weed (Asclepias tuberosa) occurred while hiking through a meadow at Gifford Pinchot State Park in northern York County.

Mixed in with the native grasses were green, shrub-like plants, topped with brilliant, clustered, orange flowers. Many assorted pollinators were hungrily consuming the nectar, so remarkably in fact, that it attracted my attention, as well. Since becoming a Master Gardener, many native plants are more noticeable to me and this plant quickly became a “must-have” for my garden.

Identified as the 2017 Perennial Plant of the Year by the Perennial Plant Association, butterfly weed is known for its ability to support insects and birds and serves as the primary caterpillar food for the monarch butterfly. Despite its name, when you see how powerfully it attracts pollinators, you will never again think of it as a weed.

Preferring dry, sunny locations, butterfly weed blooms during June to September and is hardy in USDA Zones 4 to 9. Unlike other milkweeds, it has alternating leaves and non-milky sap. While it is slow to emerge in the spring, it reaches two or three inches high and about two inches wide. It is a very low-maintenance plant that tolerates drought and is generally not afflicted by insects or diseases. Additionally, deer usually do not eat butterfly weed.

Although Asclepias tuberosa is a prairie plant, it’s suitable for several types of gardens: meadows, native gardens, nature reserves, rain gardens, and increasingly in formal to semi-formal gardens. For a striking contrast, I enjoy pairing its orange flowers with lavender (Lavendula spp).

Butterfly weed can be grown from seed. A stratification period of two to four weeks is recommended for the seeds prior to planting. I place the seed packets into an airtight container in the vegetable drawer of my refrigerator to prepare them for planting. Since I collect and plant some of my own seeds, I expect to see some flower color variation. For best results, it is recommended that gardeners purchase seeds from reputable vendors.

The butterfly weed produces a large taproot that can extend a foot or more into the soil thus propagation by division is difficult but can be done in the fall, or in early spring prior to new growth. Identifying the ideal plant site is important for butterfly weed. As plants mature, they produce additional stems and tend not to transplant well. The taproot is also referred to as pleurisy root due to its prior medicinal use in treating lung inflammation.