Mayors Could Shift Nearly 42 Percent Of U.S. Electricity To Renewables By 2025 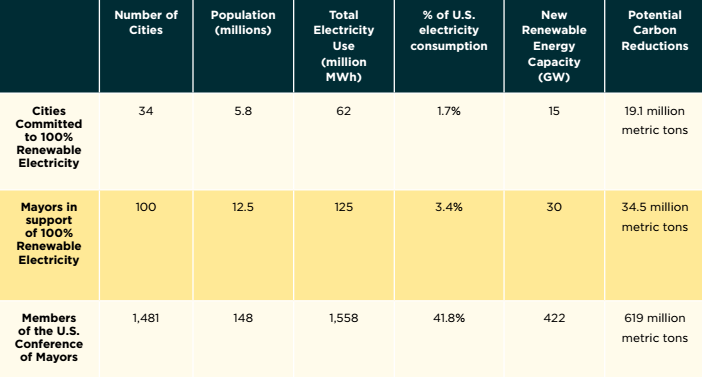 The country’s largest coalition of cities plans to vote this weekend on a pledge to make 100 percent renewable power a top policy priority over the next decade.

The resolution by the U.S. Conference of Mayors ― who represent a 148 million people and 41.8 percent of the country’s electricity use ― would be the broadest rejection of President Donald Trump’s decision to withdraw the United States from the Paris climate agreement. If each of the federation’s 1,481 cities actually converted to zero-emissions electricity before 2025, U.S. emissions of planet-warming gases would fall by 619 million metric tons, according to a Sierra Club analysis shared exclusively with HuffPost.

“The more cities that not only pledge to move to 100 percent renewable energy but pass that into a local law or ordinance and begin to work on that transition,” Jodie Van Horn, director of the Sierra Club’s “Ready for 100” campaign, told HuffPost by phone Wednesday from the mayors’ conference in Miami, “the closer we can get to meeting the Paris goals through city-level action.”

The Paris Agreement, a pact signed by every nation except Syria and Nicaragua, set broad, non-binding targets for countries to reduce emissions of the greenhouse gases that cause the planet to warm and alter the climate. The U.S., historically the world’s biggest emitter, agreed to scale back pollution by 26 percent to 28 percent below 2005 levels by 2025. Trump announced plans to pull out of the deal this month after shredding virtually every policy meant to meet those goals.

An alliance of more than…