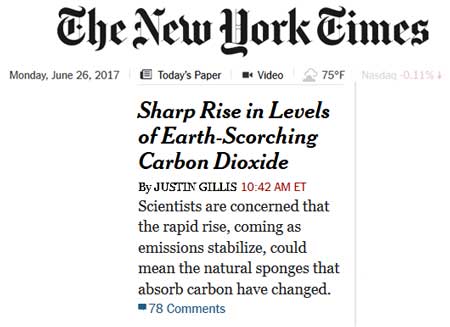 The New York Times has set a new standard of scientific misrepresentation in this front page title to the latest climate change consensus salvo from Justin Gillis. On the front page of the online edition of the NY Times for 26 June 2017, the title is given: “Sharp Rise in Levels of Earth-Scorching Carbon Dioxide”

The actual title of the article, once one clicks through to it, is “Carbon in Atmosphere Is Rising, Even as Emissions Stabilize”.

Who knows who at the NY Times thinks that characterizing CO2 as “Earth-scorching” is a valid scientific description of one of the absolutely necessary-for-life trace gases in the Earth’s atmosphere. It certainly is not a proper journalistic description.

My objection is that it is a serious violation of Society of Professional Journalists’ Code of Ethics specifically:

Provide context. Take special care not to misrepresent or oversimplify in promoting, previewing or summarizing a story.

What do you think the phrase “Take special care not to misrepresent or oversimplify in promoting, previewing or summarizing a story” might mean in this context?

It is simply scientifically false to label CO2 as “Earth-scorching” in so many ways that it is difficult to begin to write about it. Journalistically, even if it were anywhere near true, it would be an oversimplification.

Is Mr. Gillis blameless? He doesn’t write the front-page headlines. I wish I could say that but I can’t. Gillis writes: “The excess carbon dioxide scorching the planet rose at the highest rate on record in 2015 and 2016. A slightly slower but still unusual rate of increase has continued into 2017.” — this is Gillis’ misrepresentation.

Are CO2 concentrations particularly high? Looking at the NY Times graphic, we see that they are at mountainous heights:

Looking at NOAA’s graphic, not so mountainous:

The NY Times art department (or whomever is making the graphics) has taken data from the NOAA graphic and stretched it vertically to increase the appearance of a large increase.

I must say I can’t see that incredible dangerous increase in rate of rise in the second NOAA graphic — because it is in reality an increase in fractional parts per million. Note that the current spike in the two bar graphs matches a spike from the last El Niño in 1998 and the recent 2015-2016 El Niño .

Is the planet scorching?

How about the US?

Oddly flat from the 1920s thru the 1980s — [adjusted?] up to flat again in the new century, centering on 53.5 °F or 12 °C — is that “scorching”? It is a bit chilly for me. Note that Global Average Temperatures are in the same absolute temperature…