Pruitt Doubles Down On Big Coal Lie With ‘Pruitt Math’ 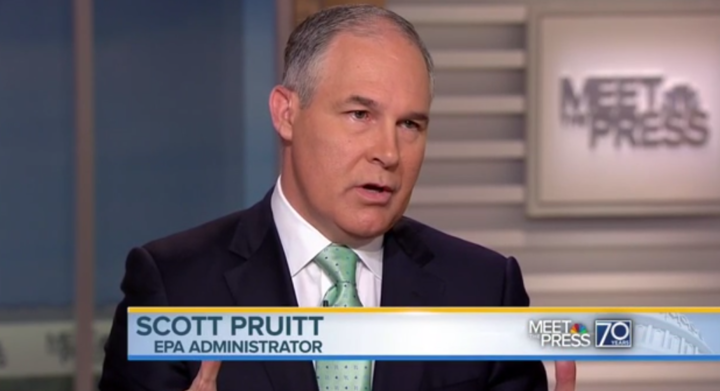 When Pruitt gave the same lie to three separate networks (Fox, ABC and NBC) on Sunday, claiming that 50,000 new coal jobs had been created since the fourth quarter of 2016 (and 7,000 new coal industry jobs in May alone), I quickly posted a fact check on HuffPost. Pruitt earned a “Four Smokestack” rating — reserved for lies that are both deliberate and dangerous. The only question at all was on whether or not it was deliberate or a product of Pruitt not knowing what he was talking about (or a little of both). He gave the same talking point in three interviews, so the idea that it was a slip of the tongue is out the window.

Now, Pruitt’s spokeswoman Amy Graham has told reporters that Pruitt was referring to all mining, not just coal mining, in making his case about why Trump pulled out of the Paris climate accord. But this statement is also false. Here is Taylor Kuykendall of S&P Global Market Intelligence Report (paywall), reporting on Graham’s June 5 statement:

An EPA official told S&P Global Market Intelligence that Pruitt’s claim on NBC’s “Meet the Press” was referencing the broader mining sector and was quoting statistics from a June 2 jobs report by the U.S. Bureau of Labor Statistics, or BLS. The report noted that the entire mining sector added 7,000 jobs in May — not just the coal sector as Pruitt appeared to claim.

OK, so let’s call this the “Pruitt Math” defense — if the numbers don’t provide the message he wants, he can just add in other stuff until he can say what he wants to say.

There is no boom in mining jobs. Here are the facts: