Secret Snails of the Magic Valley 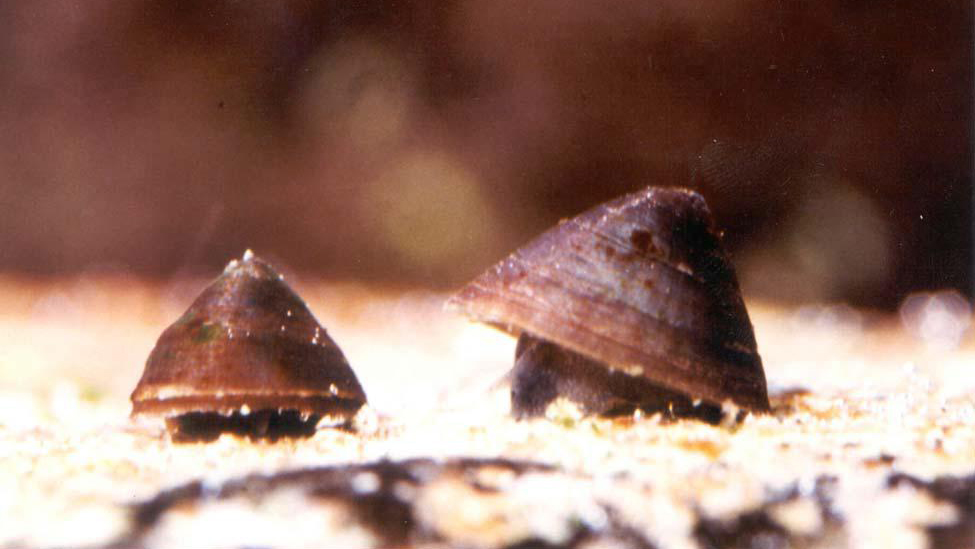 I’m staring at a creature that, to put it mildly, would be easy to overlook. It’s a snail, but I wouldn’t have known that if I hadn’t been told. It just looks like a shell stuck to a rock, so tiny that I could easily drop it down the cap of my pen, and still have room for a couple dozen more.

It blends in with the rock, so it basically looks like a little dimple. Nobody will accuse the Banbury Springs lanx of being charismatic megafauna. At first glance there is nothing remarkable about it.

But when I look closer, and look around, everything about the Banbury Springs lanx is remarkable.

U.S. Fish and Wildlife Service biologists Greg Burak and Dave Hopper have invited me on their monitoring surveys for this snail species, found only in the Thousand Springs region of southern Idaho. The little snail we’re seeking may be unassuming, but its story can tell us a lot about geology, conservation and water in the West.

I join Burak and Hopper in their truck on an overcast spring morning. We motor south out of Boise on the interstate, getting off in an area along the Snake River known as the Magic Valley.

Seemingly endless fields of irrigated agriculture stretch out before me, tilled and muddy. Those farms are periodically interrupted by large, confined dairy operations: thousands of cows mill around in their pens. Anywhere you look, it’s an area dominated by intensive agriculture.

It seems an unlikely place to be visiting crystal-clear springs, but that’s what we’re doing. In fact, the springs and the agriculture we’re passing are tied inextricably together.

The Snake River – the large tributary of the Columbia – winds its way through this part of Idaho. Along this section, crystal clear water bursts out of canyon walls, forming beautiful, Caribbean blue springs.

This water originates more than 100 miles to the north, where several rivers flow out of the Rocky Mountains into the extensive lava fields of Craters of the Moon National Monument. The rivers sink into the porous lava, and they flow underground until they hit the canyon. Other rives and creeks east of the monument also infiltrate into the groundwater, helping create one of the country’s largest aquifer systems. The watery journey can take 200 years before it emerges purified, clear and cold. But land uses over the aquifer appear to influence its volume and quality.

Historically, it must have been one of the wonders of the West, with thousands of springs cascading from the canyon. The area is still known as Thousand Springs. But all that clear water in the desert couldn’t go unnoticed.

As Idaho was settled, both the federal government and farmers worked to “make the desert bloom.” That involved dams and irrigation, of course, but it also involved tapping those springs. The Magic Valley became the largest center of trout aquaculture in the country, with acres of fish pools being fed the clear water.

But springs still remained scattered about the valley. These little jewels were popular among human visitors for their scenery: isolated desert canyons with blue waters, pretty waterfalls, bubbling springs. Some of the wildlife is quite apparent: golden and bald eagles soar overhead, thousands of waterfowl cluster on the surrounding Snake River. You might see a porcupine or even a bobcat scurrying into the rocks.

The smaller species – the ones you don’t readily see – are even more interesting.

Any student of biodiversity knows that isolated islands often contain endemic species, creatures found nowhere else. The Galapagos is the most famous example: home to a variety of finches that rapidly evolved into new species, as well as iguanas, lava lizards, and more.

Not all habitat islands are surrounded by water. In some cases, the islands are water. That’s the case in the Thousand Springs area. Even prior to agricultural development, these…