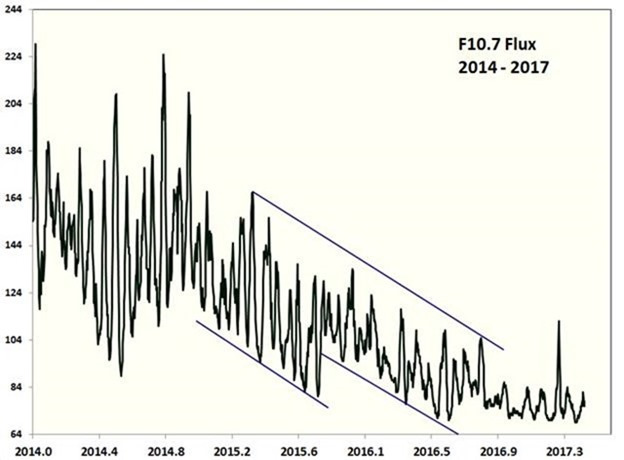 The F10.7 flux shows that over the last three and a half years the Sun has gone from solar maximum through a bounded decline to the current stage of the trail to minimum. Solar minimum is likely to be still three years away.

According to Svensmark’s theory, the neutron flux, with its effect on cloud cover and thus the Earth’s albedo, is one of the bigger climate drivers. For Solar Cycle 24, the neutron flux duly turned around and starting rising again in 2015, one year after solar maximum. It is a safe bet that the neutron flux is heading for a record high at solar minimum (+ one year) relative to the instrumental record.

The last weak solar cycle was Solar Cycle 20 which caused the 1970s Cooling Period. From the same stage in that cycle the neutron count flattened out to minimum. That could happen for Solar Cycle 24 but it is more likely to keep rising to minimum as 23 did and thus we can expect a count, at the end, of over 7,000.

If we conflate the F10.7 flux and the Oulu neutron count inverted, that shows they tracked each other closely up to 2004. Something changed in 2004 and since then the neutron count has been higher relative to its previously established correlation with the F10.7 flux.