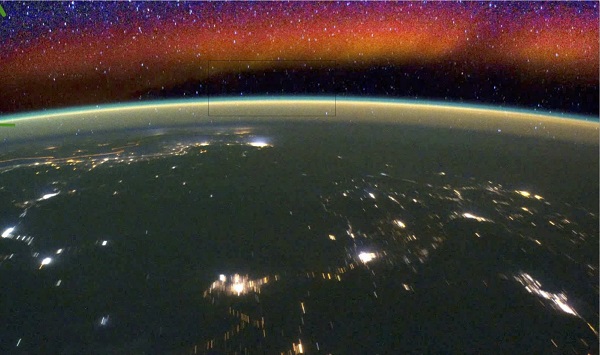 WASHINGTON, DC — Dating back to the first century, scientists, philosophers and reporters have noted the occasional occurrence of “bright nights,” when an unexplained glow in the night sky lets observers see distant mountains, read a newspaper or check their watch.

A new study accepted for publication in Geophysical Research Letters, a journal of the American Geophysical Union, uses satellite data to present a possible explanation for these puzzling historical phenomena.

The authors suggest that when waves in the upper atmosphere converge over specific locations on Earth, it amplifies naturally occurring airglow, a faint light in the night sky that often appears green due to the activities of atoms of oxygen in the high atmosphere. Normally, people don’t notice airglow, but on bright nights it can become visible to the naked eye, producing the unexplained glow detailed in historical observations.

Few, if any, people observe bright nights anymore due to widespread light pollution, but the new findings show that they can be detected by scientists and may still be noticeable in remote areas. Bright airglow can be a concern for astronomers, who must contend with the extra light while making observations with telescopes.

“Bright nights do exist, and they’re part of the variability of airglow that can be observed with satellite instruments,” said Gordon Shepherd, an aeronomer at York University in Toronto, Canada, and lead author of the new study.

Historical accounts of bright nights go back centuries. Pliny the Elder described bright nights, saying, “The phenomenon commonly called ‘nocturnal sun’, i.e. a light emanating from the sky during the night, has been seen during the consulate of C. Caecilius and Cn. Papirius (~ 113 BCE), and many other times, giving an appearance of day during the night.”

European newspapers and the scientific literature also carried observations of these events in 1783, 1908 and 1916.

“The historical record is so coherent, going back over centuries, the descriptions are very similar,” Shepherd said.

Modern observations of bright nights from Earth are practically nonexistent. Even devoted airglow researchers like Shepherd and his colleagues have never seen a true bright night with their eyes. But even before the advent of artificial lighting, bright nights were rare and highly localized.

“Bright nights have disappeared,” Shepherd said. “Nobody sees them, nobody talks about them or records them any longer, but they’re still an interesting phenomenon.”

Shepherd knew of the historical observations and could see bright night events reflected in airglow data from the Wind Imaging Interferometer (WINDII), an instrument once carried by NASA’s Upper Atmosphere Research Satellite (1991-2005), but he couldn’t explain why the phenomena occurred.

He and his co-author, Youngmin Cho, a research associate at York University, searched for mechanisms that would cause airglow to increase to visible levels at specific locations.

Airglow comes from emissions of different colors of light from chemical reactions in the upper reaches of the atmosphere. The green portion of airglow occurs when light from the sun splits apart molecular oxygen into individual oxygen atoms. When the atoms recombine, they give off the excess energy as photons in the green part of the visible light spectrum, giving the sky a greenish tinge.

To find factors that would cause peaks in airglow and create bright nights, the…