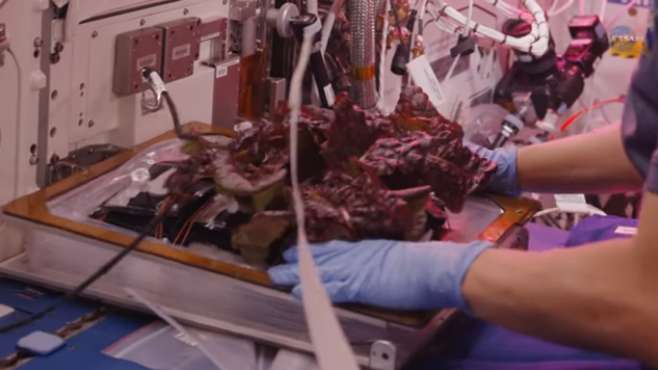 Humans attempting someday to make Mars their home may well share the sentiments expressed by the orator from ancient Rome. As for the library – books can now be stored digitally. But how does your garden grow in space?

To find out, scientists have been studying plant growth on the International Space Station (ISS). The results could help boost the productivity of both extraterrestrial and earthly gardens.

Recently, the ISS has been home to some impressive harvests, yielding tasty snacks for crewmembers! However, scientists aren’t through trying to unlock the secrets of how plants grow away from home.

“Future space outpost dwellers will need to grow plants for food and for recycling air and water,” says Anna-Lisa Paul of the University of Florida. “So we’re studying how plants adapt to the spaceflight environment. Our findings will also help us understand how plants might respond to new and challenging environments here on Earth.”

Paul and her colleague Robert Ferl have been growing plants in space since 1999, when they launched their first experiment on Space Shuttle Columbia. Several space station experiments followed. One of their most compelling discoveries was that certain root growth strategies assumed to require…