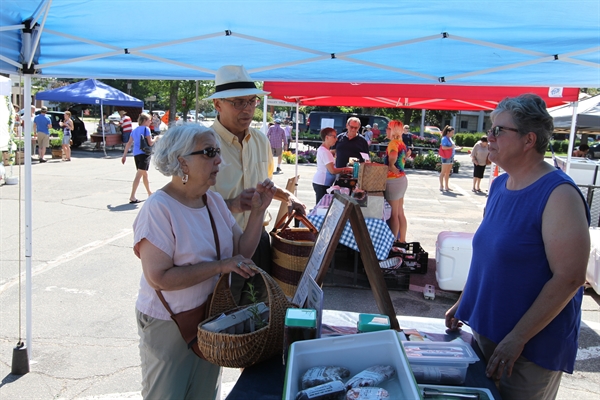 Photo by Chris Rogers Vicki Englich and Tom Dukich talked with cattle farmer Jennifer Rupprecht at the Winona Farmers Market last weekend. There has been slow but steady growth at the market over the years, longtime vendors said.

It’s a tradition almost as old as civilization itself — farmers hauling their goods into town and selling them at open-air markets. It is far from the only way to get farm-fresh food, but local farmers market remains popular.

Winonan Greg Wood picked up some greens from Vang Xiong and Toua Vang last weekend. Toua Vang’s mother has been growing vegetables just outside Winona for nearly 10 years. Raising vegetables is her main source of income. For Toua Vang and Vang Xiong it’s a way to make a little extra money and help out Toua Vang’s mother. “It’s just nice to see the people and be outdoors. It’s hard work but it’s nice,” Vang Xiong said. “I like the idea of local people selling local produce. That’s the way it should be,” Wood stated.