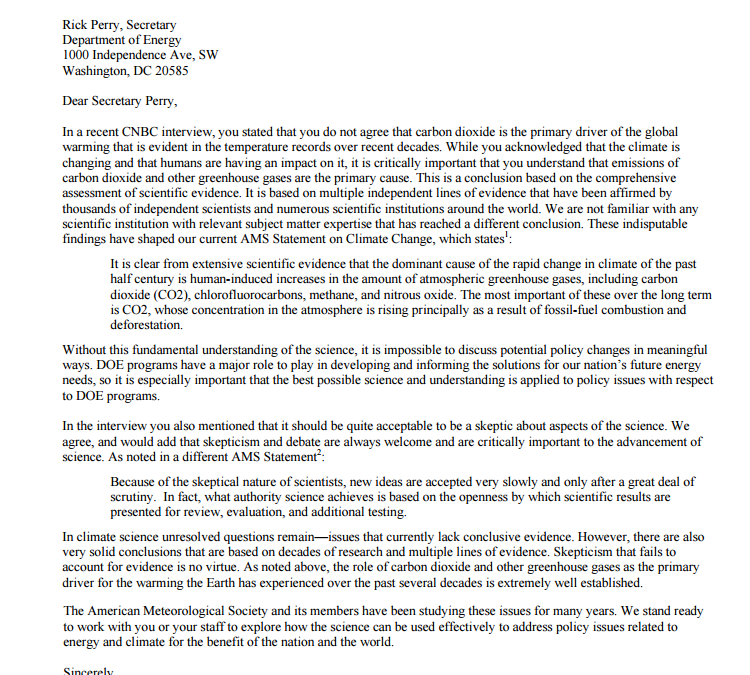 Yesterday, the American Meteorological Society (AMS) published a letter yesterday to U.S. Secretary of Energy Rick Perry, admonishing him for having the temerity to doubt that carbon dioxide is the “primary driver” of global warming.

Here is the text of the letter.

Here are a few of my thoughts.

The AMS, in their letter, say skepticism is welcome:

In the interview you also mentioned that it should be quite acceptable to be a skeptic about aspects of the science. We agree, and would add that skepticism and debate are always welcome and are critically important to the advancement of science.

Yet, the very letter they sent contradicts this, suggesting that there is no debate nor room for skepticism about carbon dioxide being the primary driver of temperature change.

The fundamental problem of our knowledge boils down to the sample size. We only have about 100 or so years of temperature records that are worth anything and even the most recent records on all that good because they’re terribly polluted by the infrastructure of human existence itself. And further our understanding of atmospheric and oceanic cycles is even more limited in time than that in a case.

Even today, we are discovering more about our atmosphere than we knew 30 years ago in June 1988 when Dr. James Hansen first declared it a problem, and there are studies that show that recent record breaking warmth, such as a paper just published in Nature, Yao et al. Distinct global warming rates tied to multiple ocean surface temperature changes. covered here on WUWT.

For the AMS to admonish Perry that there’s no room for debate on Carbon Dioxide as being the primary driver, is essentially to deny the process of science itself. Science is often right, and also often wrong, but just as often, it is self-correcting. If global warming hadn’t become such an entangled and messy social and political issue, it’s likely that science would have done some levels of self-correction on the issue already.

For example, it was once believed that the Earth’s plates did not move, until plate tectonics came along. Alfred Wegener proposed continental drift in 1912, but it took until the 1960’s for it to become generally accepted, when a drastic expansion of geophysical research, driven by the cold war, produced evidence that reopened and eventually settled the debate.¹ Science self-corrected, but it took decades because scientists are often reluctant to embrace change which threatens the validiity of their own work. It was also generally believed that stress caused stomach ulcers, until a clinician, exasperated by lack of attention to his pointing out that the real cause was the bacterium Heliobacter Pylorii infecting the stomach…