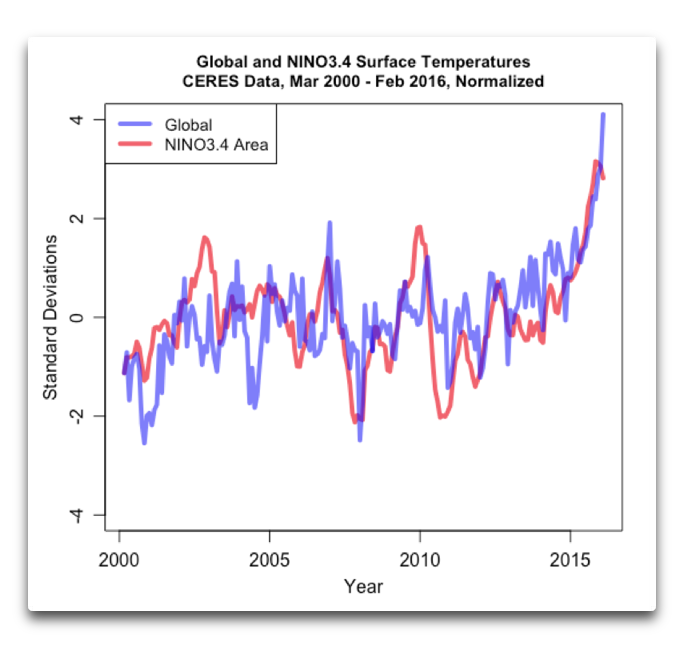 In my peripatetic meandering through the CERES satellite data, I’ve been looking at the correlation between the temperatures in the NINO3.4 region and the temperatures of the rest of the planet.

The NINO3.4 region is an area in the equatorial eastern Pacific Ocean. It covers five degrees north and south of the Equator, from 170° West to 120° West. Temperatures in that area are used to measure the strength of the El Nino / La Nina phenomenon.

Figure 1. Surface temperature of the globe (blue) and of the central Pacific ENSO3.4 area (red). Note the large “El Nino” event at the end of 2015. Both datasets are normalized (set to a mean of zero and a standard deviation of one).

Seeing this relationship, people have “removed” the NINO3.4 temperature variations from the temperature record. They have done this by subtracting out, in one form or another, the variations that are “caused” by the El Nino swings. However, I have disagreed numerous times with this procedure. Let me propose a more encompassing way to understand the relationship shown in Figure 1.

Figure 2. Correlation of each gridcell with the global average temperature. Note the large areas of negative correlation (green and blue)

Looking at that, I ask you to reconsider the idea that we can simply subtract out the temperature variations in the NINO3.4 area (blue box) from the global temperature … clearly, the relationships are far from simple. Is the fact that certain areas correlate well with the global variations a sufficient reason to “remove” them from the temperature record?

Setting those questions aside, the overall pattern in the Pacific is clearly related to the heat which is moved by the El Nino / La Nina pump. These two phenomena act together to pump warm Equatorial water across the Pacific in a westward direction. Once this warm surface water hits the Asian mainland/islands it splits and moves toward the two poles.

Now, many people say that this shows that the El Nino / La Nina is causing the global temperature changes. I say that the causation is going the other way. When the earth warms and excess heat accumulates in the eastern tropical Pacific, it triggers a cycle of the El Nino / La Nina pump. This pump moves warm water to the poles, where it is lost to space. Overall this cools the planet. The results of this pumping action can be seen in Figure 2 as the green areas in the western Pacific heading towards the north and south polar regions.

Again, a most interesting result. It makes the El Nino pattern even clearer. Note that both the Western Pacific and the North Atlantic move in opposition to the NINO3.4 area.