Toxic Waste From Solar Panels: 300 Times That of Nuclear Power 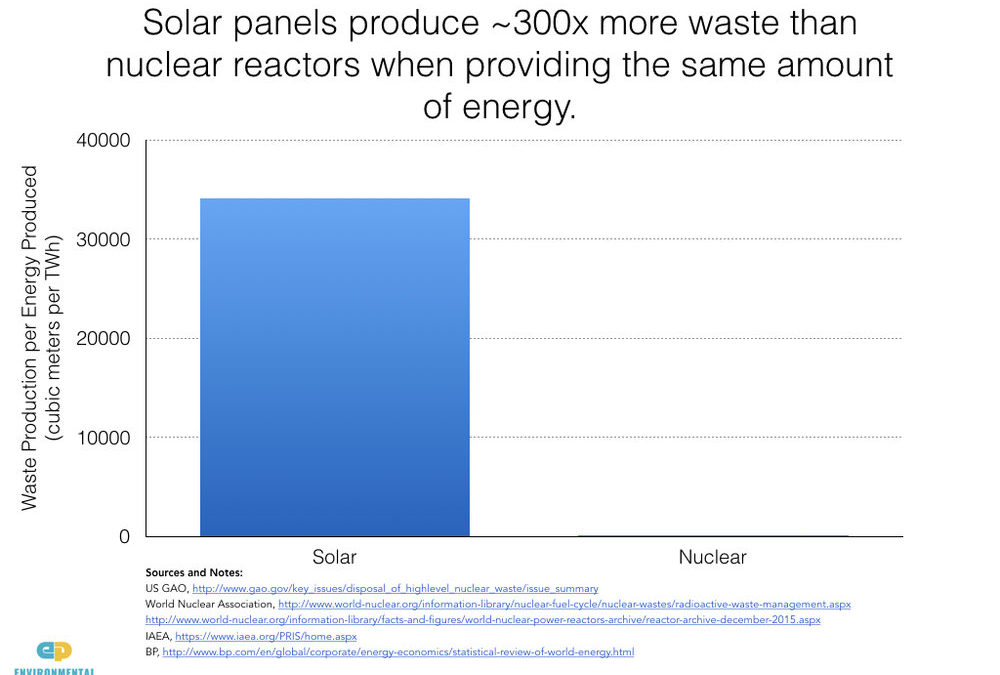 Are We Headed for a Solar Waste Crisis?

Last November, Japan’s Environment Ministry issued a stark warning: the amount of solar panel waste Japan produces every year will rise from 10,000 to 800,000 tons by 2040, and the nation has no plan for safely disposing of it.

Neither does California, a world leader in deploying solar panels. Only Europe requires solar panel makers to collect and dispose of solar waste at the end of their lives.

All of which begs the question: just how big of a problem is solar waste?

Environmental Progress investigated the problem to see how the problem compared to the much more high-profile issue of nuclear waste.

The study defines as toxic waste the spent fuel assemblies from nuclear plants and the solar panels themselves, which contain similar heavy metals and toxins as other electronics, such as computers and smartphones.

By Jemin Desai and Mark Nelson

Jemin Desai is an EP Fellow and a student at UC Berkeley. Mark Nelson is EP Senior Researcher.

Piling on a bit here… Nuclear waste can easily be safely disposed of:

Preliminary evaluation of deep borehole disposal of high-level radioactive waste and spent nuclear fuel indicates the potential for excellent long-term safety performance at costs competitive with mined repositories. Significant fluid flow through basementrock is prevented, in part, by low permeabilities, poorly connected transport pathways, and overburden self-sealing. Deep fluids also resist vertical movement because they are density stratified. Thermal hydrologic calculations estimate the thermal pulse from emplaced waste to be small (less than 20° C at 10 meters from the borehole, for less than a few hundred years), and to result in maximum total vertical fluid movement of ~100 m. Reducing conditions will sharply limit solubilities of most dose-critical radionuclides at depth, and high ionic strengths of deep fluids will prevent colloidal transport.

DOE estimates that 109,300 metric tons heavy metal (MTHM) of high-level waste and spent nuclear fuel – primarily commercial spent nuclear fuel (CSNF), but also DOE spent nuclear fuel (DSNF), and high-level waste glass (HLWG) – will need to be disposed of in the US (the projected US HLW and SNF inventory is summarized in Appendix A).,Deep borehole disposal, characterization and excavation costs should scale linearly with waste inventory: small inventories require fewer boreholes; large inventories require more boreholes. Not needing a specially engineered waste package would also lower overall borehole disposal costs. Both aspects might make borehole disposal attractive for smaller national nuclear power efforts (having an inventory of 10,000 MTHM or less). In the US, the 70,000 MTHM of waste currently proposed for Yucca Mountain could be accommodated in about 600 deep boreholes (assuming each deep borehole had a 2 km long waste disposal zone that contained approximately 400 vertically stacked fuel assemblies). The remainder of the projected inventory of 109,300 MTHM could be fit into an additional 350 or so boreholes.