Trump Pulled The U.S. Out Of The Paris Deal. Now Greens Want The GOP To Pay. 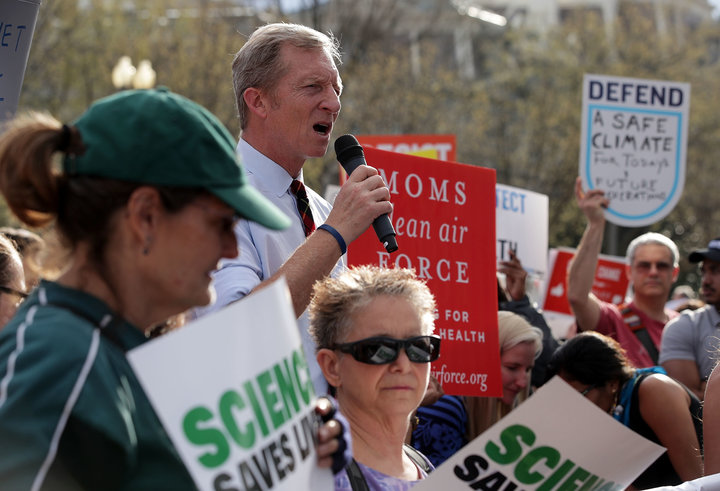 WASHINGTON ― Green groups and scientists tried to make climate change a wedge issue for years, and voters threw the economy, jobs, immigration and national security back in their faces.

President Donald Trump may have just changed that.

On Thursday, Trump announced the U.S. will withdraw from the climate change agreement nearly 190 countries joined in Paris in 2015, making America one of only three nations to ignore the pact. The unprecedented agreement ― a pillar of former President Barack Obama’s legacy ― between both rich and poor countries put the globe on a path to keep warming “well below” 2 degrees Celsius (3.6 degrees Fahrenheit) above pre-industrial levels.

But Trump’s decision to take the U.S. out of the agreement, effectively retreating from the global conversation on how to combat climate change, may end up hurting Republicans politically. Democrats and environmental groups are already chomping at the bit.

“WE ARE NOT DETERRED, CLIMATE IS ON THE BALLOT IN 2020,” read an email sent out by Sen. Brian Schatz (D-Hawaii) as Trump stood in the White House Rose Garden announcing his decision.

Trump had barely started his speech when Sen. Sheldon Whitehouse (D-R.I.) sent out his own statement, which included a rare plea.

“If you haven’t joined an environmental group, join one. If your voice needs to be heard, get active,” Whitehouse said. “If you are a big corporation with good climate policies that has shied away from engaging politically, it’s time to engage. And if you’re a university that teaches climate science, it’s time to stand up for your scientists. Whoever you are, help end climate denial and take action.”

But even with the ammunition that a Trump presidency has provided Democrats ― who are hoping to make inroads against the Republican majority in both chambers of Congress in 2018 and 2020 ― green groups and the Democratic Party will have to learn from prior mistakes. For one, the talking points on climate change and the Paris accord during an election cycle can’t be about simply saving the planet or keeping streams clean. They have to make a strong connection between climate change and jobs; climate change and asthma; climate change and future generations.

Jamie Henn of the climate action group 350.org thinks they can do it. But he also acknowledged it will be a challenge to address the rift in the Democratic Party over how to turn out voters, prevent a repeat of 2016, and make a wedge issue out of a somewhat abstract problem like human activity contributing to the destruction of the planet.

“What was missing from Democrats in the last election was making this lofty rhetoric about a beautiful future feel like an economic plan that addresses people’s concerns,” Henn said.

350.org was critical in leading the climate movement’s battles against Keystone XL, fracking in natural gas production, and the Dakota Access pipeline. The ability of environmental organizations like 350, Sierra Club and the League of Conservation Voters to make the “fossil fuel industry feel real to people,” as Henn put it, somehow gets lost when those groups try to make the jump to climate change and the Paris climate agreement.