Trump Recklessly Pulls U.S. Out Of The Paris Agreement 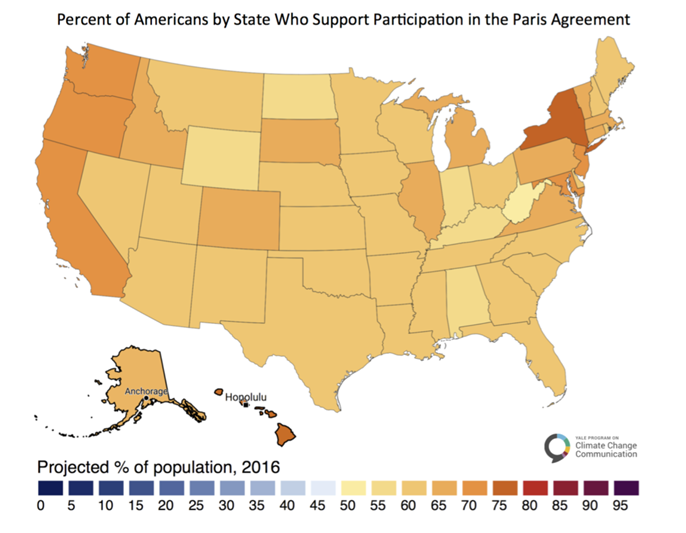 President Trump has decided to pull the U.S. out of the historic Paris Agreement on climate change. This agreement marked a critical turning point in efforts to address climate change as it included, for the first time, specific commitments from all major countries and a path to strengthen domestic climate action in the years ahead. Trump’s decision is an assault on our children’s future, American companies, and all the countries in the world.

“This is a grave and grievous mistake that hurts our country – starting now.

“Trump’s extremism has isolated us from the global coalition we helped to create – with China, Germany, India, Japan and 190 other countries – to fight the central environmental challenge of our time. He’s sidelined American workers in the clean energy boom that’s remaking the global economy. And he’s abandoned our children to climate catastrophe.

“It’s on the rest of us now – state and local officials, business leaders, citizens, educators, consumers, activists and congressional members who grasp the stakes for our future – to keep the promise of Paris alive.”

President Trump announced that he intends to pull the U.S. out of the Paris Agreement following the procedures outlined in the agreement. As the agreement outlines, the U.S. can formally notify the world that it intends to withdraw from the agreement on Nov. 4, 2019 and that withdrawal doesn’t take effect until one year later. So the U.S. won’t be formally out of the Agreement until November 4, 2020 — after the end of Trump’s first term. The next administration should quickly rejoin the Paris Agreement.

Trump is deciding to align against the desires of the American people, American businesses, workers, and the entire world

President Trump’s decision to withdraw from the Paris Agreement goes against the best interest of America as reflected by the broad swath of the U.S. that has argued for staying in the agreement.

The American people overwhelmingly support the Paris Agreement. The vast majority of American — 70 percent — want the U.S. to stay in this agreement (see figure). That includes the majority of Trump voters.

American business strongly support the U.S. remaining in the Agreement. Over 1,100 companies with major operations in the U.S. have urged Trump to stay in the Paris Agreement as they have signed on to letters, joined advertisements, and placed phone calls to the White House. These companies account for over $3.6 trillion in annual revenues and include many of America’s most well-known brands. They include more than one-third of…