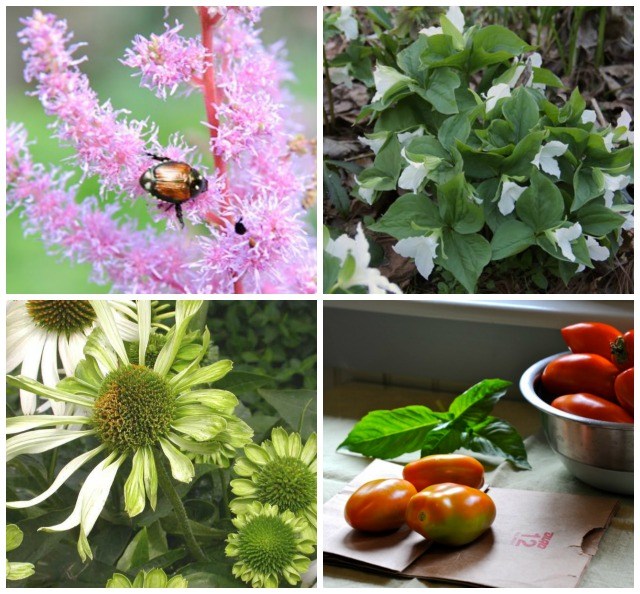 TOMATOES NOT RIPENING, or your trilliums sulked? Japanese beetles arriving? Didn’t even plant any vegetables yet and wondering if there is still time? As the season heats up you may find parts of the garden overrun with weeds or perhaps an unwanted pest or two (or 20), and Ken Druse and I are likewise finding ourselves overrun—but with your Urgent Garden Questions like those, and many more.

This month on our Q&A segment we crammed in as many as we could by taking a shortcut, and instead of having live callers, we gathered more questions than ever and I just shouted them out. Call it our Lightning Round.

Important note: Got a question for a future show? Ask it in the comments or contact form on A Way to Garden dot com or KenDruse dot com, or on Facebook dot com/A Way to Garden and we’ll scoop them up as we plan for next time.

Read along as you listen to the June 12, 2017 edition of my public-radio show and podcast using the player below (or at this link).

Q. [Laughter.] Yes, except in December. This one comes from Tricia on Facebook, writing from the Fort Worth area of Texas, Zone 8, so she’s farther along in the season:

“I have loads of green cherry tomatoes on three varieties. They are not ripening as expected. Production is less than 25% of the norm. Is there a problem with the grower I purchased the transplants from?”

Ken, do you grow tomatoes or any other edibles, by the way?

Ken. I don’t grow a lot of edibles because as you know my season is very short and it’s kind of shady here. But I do grow pots of tomatoes here on the driveway, where it’s sunny and hotter. But we have no way of knowing what happened to her grower. [Laughter.]

Q. No, but I lump this in a group of tomato issues that I call “mechanical failure.” So in other words, not pests, not disease, not genetic deficiency—that it wasn’t a good variety or whatever. In “mechanical failure” I lump everything from blossom end rot—where you have a healthy plant but get these shrunken ends on some fruits—or what she’s having, which is fruit set but not good ripening.

Or some people don’t get good fruit set during certain phases. All of these I call mechanical failures, not that I am some botanist expert but it’s just my made-up term. Just because it’s what happens when the weather is inhospitable to the biological functions happening properly

So I think this is a mechanical failure kind of thing, and I think she will have more ripening later, if the weather is conducive. Like if it’s over 85 degrees, you can get lousy ripening. [More details on that from our friend Joe Lamp’l of Growing a Greener World public television show.]

[For help diagnosing other “Tomato Troubles” see this link.]

Ken. And sometimes you don’t even get pollination.

Q. She said she had fruit set, but was frustrated by low ripening. Of course you can always bring them in and ripen them on the kitchen counter—but that’s usually for the end of the season, when it’s getting cold. [How to ripen a tomato: tricks to try.]

Ken. Have you ever had fried green cherry tomatoes, with a toothpick—a little hors d’oeuvre?

Q. No, but it sounds good. You sauté them?

Q. [Laughter.] OK, we’re moving along; I said it was a lightning round.

does picking trillium flowers cause harm?

Q. Kathy on Facebook wrote: “I have 2 trillium plants in my garden. One blooms profusely and I cut one flower to bring inside. I now know I hurt the plant and it won’t come back. What is your opinion? I’m heartbroken that I unknowingly killed my beautiful plant.” [Trillium grandiflorum, above, by Ken Druse.]

Apparently she did a Google search and it says “oh, no!” if you cut the flower. Remember when we first saw big stands of trilliums together, Ken?

Ken. At the late Evelyn Adams’s in Massachusetts. We learned a whole lot that day. She had about 1,000 trillium blooming, and they all started from one plant that she rescued from the foundation of a barn in New Hampshire, I think.

Q. Wow. And she didn’t treat them with too much TLC; she expected them to perform.

Ken. Things happen, and sometimes you break a plant by accident and I’m horrified. But often they take a year off; they just don’t bloom the next year at all, nothing comes up, and then the next year they come up. So she may not have killed it. But it’s certainly not a good idea.

Ken. You said just the flower.

Q. I’m crossing my fingers that’s the situation. You know in that same project where we went to see Evelyn Adams and her 1,000 white trillium, we went to see Neil Diboll at Prairie Nursery outside Madison, Wisconsin, remember?

Q. This was years ago, for one of your books, “The Natural Habitat Garden.” Prairie Nursery has advice about growing trilliums on its website:

“Picking a trillium flower does not kill the plant but damage can result if the green leaves are taken as well. If the leaves are taken you won’t see renewed growth until the following year…” so what you were saying, Ken…”which may not happen at all depending on the size of the rhizome.” So like a baby plant will suffer more heavily. “This fact makes the colonies susceptible when they are heavily browsed by deer. Plants will die out after several years of repeated browsing,” it says. The deer eat the flowers and the leaves, and that has been a big problem with native plants in the wild. As deer populations have soared, the native plants in the woodlands have diminished. [More advice on growing trilliums.]

Q. On to Japanese beetles: I think everyone is holding their breath, because depending on where you live, they may appear in June or around July 4. This question is from a blog comment from Wendy, a 7th grade science teacher in New Hampshire with 15 prized rose bushes in her home garden, and who asked what a lot of other people are asking about now, too:

“Is there any ‘new news’ out about the best way to keep Japanese beetles at bay?”

Wendy told me she isn’t using traps and hasn’t yet tried inoculating the lawn with substances like Milky Spore but would be into it. [USDA map of Japanese beetle range, above.]

Did you ever have a Japanese beetle situation, Ken?

Ken. When I first came to this place the Japanese beetles—we didn’t have a single rose. This was about 20 years ago. We planted everything, but no roses. I don’t grow grapes, but I know people who end up with lace-leaf grapes.

Ken. They’re so eaten. But early on we did Milky Spore on the grass areas. That’s a bacillus, I think, and it attacks the grubs of the Japanese beetles, and it stays in the soil for a really long time.

After we had one or two or three floods [Ken’s garden is on an island in a stream],…