Welcome to the Sea Turtle Rodeo 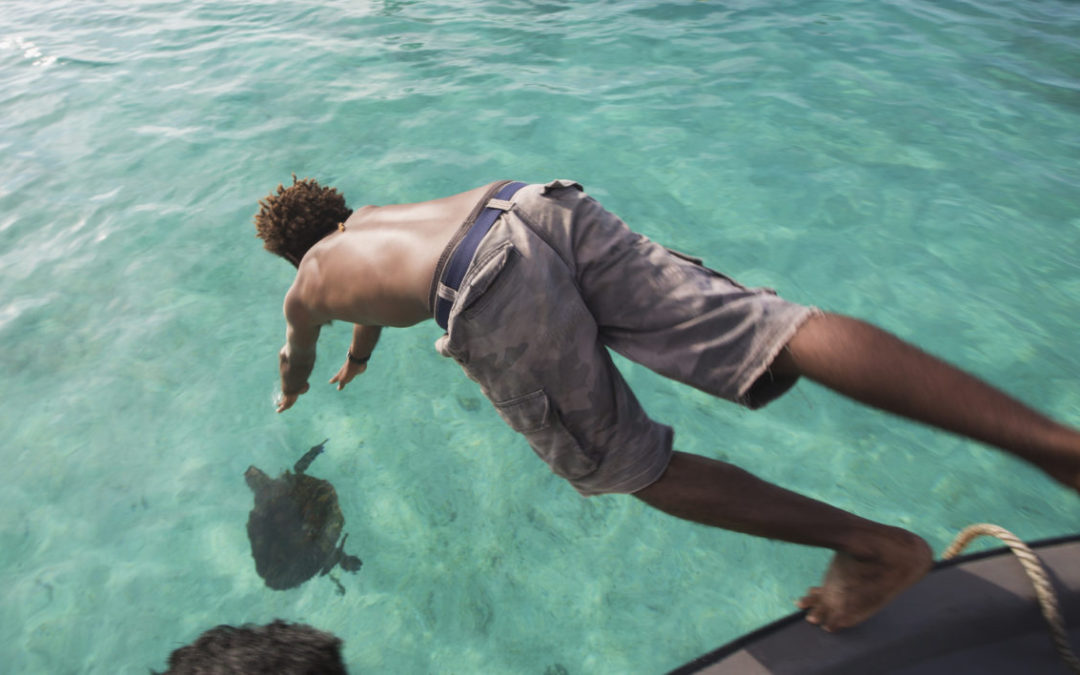 It takes real skill to catch a sea turtle…. Especially when you have to wrestle it out of the water.

Cruising over coral reefs and seagrass meadows in the Arnavon Islands, I watch as the conservation rangers in the bow yell and point; first left, then right, then left again as a young green turtle bobs and weaves below us, trying to outrun our boat. After 10 minutes the turtle tires and we slow, the outboard dropping to a dull rumble. Andre Robo stands barefoot on the narrow bow, peering over the edge, one hand out for balance and the other gripping the rope like a cowboy holding the pommel.

He crouches low, waiting for the perfect moment, and then rockets off the edge like a swimmer diving in for a race. The driver cuts the motor, swerving away. We wait… seeing nothing but a dark shape and green shirt against the reef. Seconds later he bursts to the surface — frantic turtle held aloft — and we all cheer.

We’ve caught the first turtle of the rodeo.

Here in the Arnavon Islands, community conservation rangers and Nature Conservancy scientists are catching juvenile green turtles — a process nicknamed “the turtle rodeo” — as part of a long-term tagging program to gather data on growth rates and raise community awareness for turtle protection.

A Safe Haven for Greens in the Solomons

The green sea turtle, Chelonia mydas, is an endangered species found in tropical seas around the world. Primarily herbivorous, adult turtles graze like underwater cattle on seagrass meadows, trimming the vegetation and keeping the plants healthy.

Juvenile greens have a beautiful brown-and-olive carapace, but the species is not named for the color of its shell. “Green” refers to the thick layer of greenish-tinged fat and flesh beneath the carapace. Green turtles are part of a traditional diet for many coastal communities across the world, many of which still harvest sea turtles for food. (In Solomon Islands, the nickname for the species is “Solomon’s beef.”)

But the bigger threat to greens — and the cause for the species’ catastrophic decline — remains the illegal wildlife trade. Unlike hawksbills, which are valued for their mottled shell, greens are typically poached for bogus medicinal benefits and a trade in their meat and protein-rich eggs. Like other turtle species, greens are also threatened by death in fishing nets, pollution, and habitat destruction.

In the Solomon Islands, green turtles have a safe haven in the waters surrounding the Arnavon Community Marine Park (ACMP). A multi-hour boat ride from the mainland, these four palm-strewn islands in the middle of the Manning Straight are a critical foraging ground for juvenile green turtles. With help from The Nature Conservancy, they also recently became the first national marine park in the country.

“The Arnavons is known for nesting hawksbills, but we also have foraging juvenile greens and very low numbers of nesting greens,” says Richard Hamilton, the Nature Conservancy’s Melanesia program director.

Just one out of every 100 nesting turtles is a green, but the seagrass meadows and fringing reefs are teeming with juveniles. ACMP rangers from the three closest communities manage the islands, monitoring turtle populations and protecting turtles from poachers, which are still an ever-present threat.

Since 1992, rangers and Conservancy staff have conducted a green turtle tagging program to gather data on the local population. Nearly half of the population is tagged and frequently recaptured, providing a wealth of data on the growth rates of young greens.