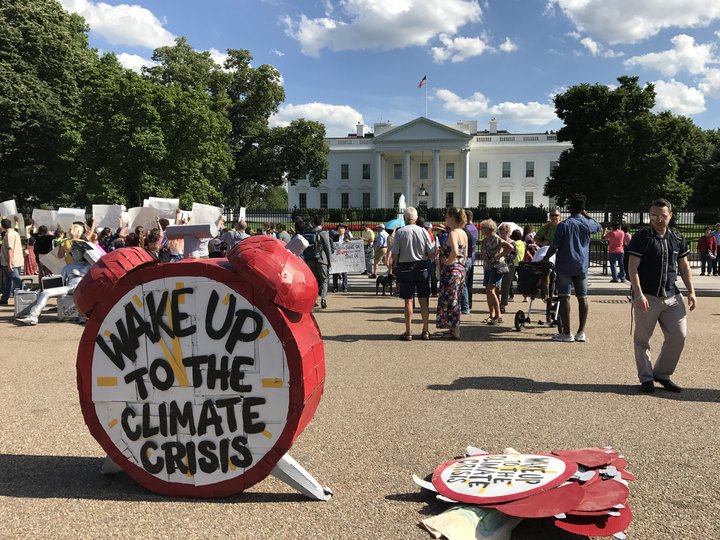 WASHINGTON ― President Donald Trump had barely wrapped up his White House Rose Garden speech about pulling out of the Paris Agreement on climate change when Rachel Schragis showed up outside the gates and plopped down a massive red alarm clock.

Schragis, a 31-year-old artist, made the 3-foot-tall clock out of cardboard boxes and masking tape. Hundreds of people would soon join her in flooding Lafayette Park, right next to the White House, to protest Trump’s Thursday announcement. But for the moment, it was just Schragis and her clock. She propped it up so it was facing the park, its screaming message easy for passersby to read: “WAKE UP to the climate crisis.”

“We made this clock … so it’s clear, wherever we go when we’re protesting, what we’re asking Trump to do and what we think is necessary,” said Schragis, who is also an organizer with the People’s Climate Movement, a coalition of groups focused on the climate crisis. “This is a movement of mass agreement. A majority of this country is with us, is standing with the world. But Trump listens to a very small number of people with big checkbooks.”

Chalk it up to gorgeous weather, or Trump hitting an unexpectedly raw nerve by backing out of a global climate pact, but even for a D.C. protest, this group was on fire. They set up a makeshift stage in the park and cheered on speeches by activists, politicians and Bill Nye “The Science Guy,” who warned that Trump is “jeopardizing the whole planet.” They routinely chanted “shame” at the White House, with Democratic National Committee chairman Tom Perez chiming in with…