Why I March: Climate Change And Migration Have Everything To Do With Each Other 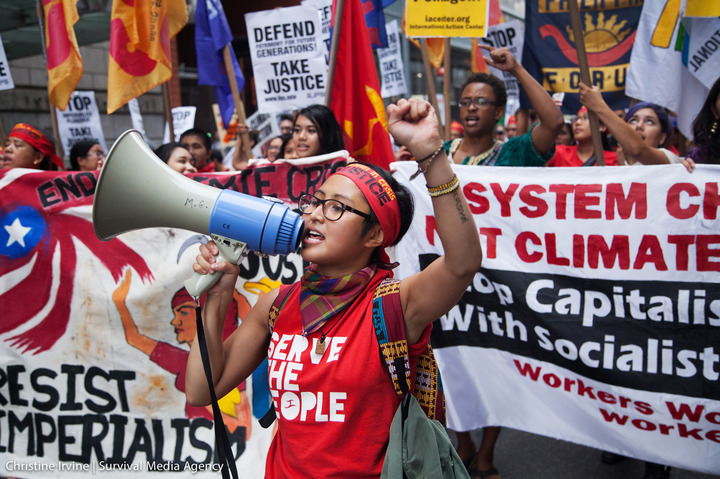 It’s pretty ironic that among Donald Trump’s first policies on his agenda were a crackdown on immigrant communities, followed by the dismantling of climate and environmental protections. By rolling back the little progress the U.S. has made on climate change ― as well as slashing the budget of the Environmental Protection Agency and lifting a moratorium on federal coal leases ― Trump’s administration is sending a global message: the U.S. (a country that considers itself a leader) will not meet any commitment to bring down greenhouse gas emissions or invest in clean energy jobs. Meanwhile, the world is warming at an alarming rate, with each year hotter than the last. And while the planet warms and more climate-related disasters take place ― droughts get longer, rain patterns shift, land becomes infertile, food and water become scarce, and sea levels rise ― more and more people are migrating due to climate change impacts. These are often the world’s poorest people, from regions that have done the least to contribute to the severity of the climate crisis.

By disregarding the necessity for bold action on climate change, the Trump administration and climate deniers everywhere (the United States, China, India, and Russia have the highest emission rates) are ensuring that communities across the globe continue to be displaced and have no choice but to migrate for their own survival.

While Trump and many in his administration throw brown and black immigrants under the bus using hateful and racist isolationist tactics, calling for “Muslim Bans” and empowering Immigration and Customs Enforcement (ICE) to deport millions with little to no due process, his administration’s short-sighted and deliberate decisions to invest in the fossil fuel industry means that he is effectively aiding the process of creating more migrants.

It is estimated that by 2050, there will be 200 million people displaced by climate change-related impacts. According to the International Displacement Monitoring Centre, since 2008, an average of 26.4 million people per year have been displaced from their homes by disasters brought on by natural hazards. Climate change causes migration, and people migrate to flee the impacts of climate change on their homelands.

Make no mistake: people should have the right to migrate no matter what. However, the majority of migration happens because people need access to a better life. If there is no way for them to live in their homelands ravaged by climate change and other socio-economic impacts, they are left with no choice but to move.

We see this all over the world. In the United States, people in the Gulf are already being internally displaced due to rising sea levels. Isle de Jean Charles in Louisiana, home to the Biloxi-Chitimacha-Choctaw tribe, has lost 98% of its land and most of its population to coastal erosion and rising sea levels since 1955. The population of the…