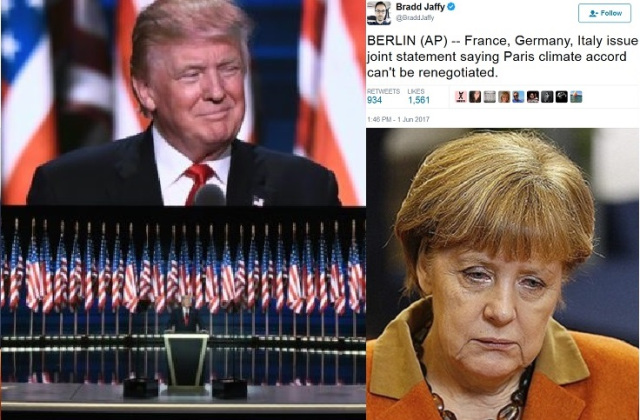 Interesting Analysis at The Conservative Treehouse. I’m only posting only a small portion.

German Chancellor Angela Merkel delivered some rather strongly worded remarks in advance of the upcoming G20 summit in Hamburg Germany. Reuters frames the Merkel statements as a warning to U.S. President Donald Trump.

In a defiant speech to parliament a week before she will host a summit of the world’s top economic powers in Hamburg, the northern port city where she was born, Merkel did not mention Trump by name but said global problems could not be solved with protectionism and isolation. (read more)

However, seeking control is a reaction to fear. Ms. Merkel, the EU, and the larger multinational global interests therein, fear Trump… and for good reason, he’s winning.

President Trump has put a jaw-dropping U.S. energy platform solidly into place. You can learn more about them HERE and HERE. The announcements last week are tectonic in consequence though seemingly lost amid the chafe of media reporting over twitter spats.

Everything President Trump’s team does is connected to a bigger, much bigger, picture than most people are paying attention to. However, those who control the levers of multinational power are paying very close attention.

At it’s core and central elements ‘America-First’ is about prosperity and national security through the utilization of leveraged economic power. For four decades, as he built out his empire of holdings, every-single-day at every-single-opportunity, Donald Trump voiced vociferous frustration that politicians were allowing the U.S. to be controlled, lessened, weakened and robbed by multinational economic interests.

The historic fact of Trump’s decades-long position must be understood in order to understand the severity, consequence, deliberateness and thoughtfulness of his corrective plan of action. You cannot overemphasize how strong these positions are. Inasmuch as you inherently care for the guardianship of your child, likewise does Donald Trump view the United States with such a disposition of care, concern and stewardship.

In Trump’s mind, failure in his goal to reestablish American economic power, economic strength and economic dominance is no more an option than a mother failing to grasp the hand of her child walking amid edge of a sheer…