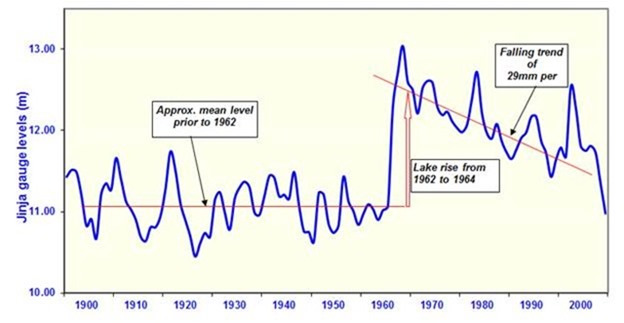 From a post a couple of days ago: “an F10.7 flux above 100 causes warming and below that level causes cooling.” Greg asked “Can you prove that?” I already had in this WUWT post from 2012. But it is worth revisiting the subject because it answers the big question – If all the energy that stops the Earth from looking like Pluto comes from the Sun, what is the solar activity level that corresponds to our average climate? Because solar activity is falling and climate will follow.

As Nir Shaviv observed, the oceans are a big calorimeter. First, proof of concept comes from a much smaller body of water: Lake Victoria in East Africa. Back in the 1920s it was realised that the level of Lake Victoria went up and down with the solar cycle. Then the relationship broke down in the 1930s, corresponding to the beginning of the Modern Warm Period, before resuming again in the 1970s.

If we take out the period of non-correlation and detrend afterwards for the 2 metre rise from 1962 to 1964, this is what the relationship between lake levels and solar cycles looks like:

The relationship is very clear, in fact beyond indisputable. It also holds true for the body of water that covers 70 percent of the Earth’s surface as shown by Figure 3:

Bingo. If we take the change in sea level from one year to the next plotted against average sunspot number for that year, we get a near-straight line relationship. The…